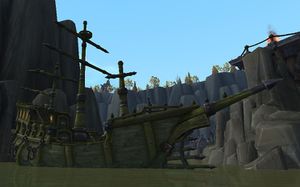 The Deathbringer in Ashild's Bay.

The Deathbringer is a Forsaken battleship located in Ashild's Bay in Stormheim, on the Broken Isles.

A member of the large fleet dispatched to the Broken Isles by Banshee Queen Sylvanas Windrunner, the Deathbringer was assigned to the Forsaken expedition in the vrykul-dominated region of Stormheim. Along with the Oblivion, it is responsible for spearheading Sylvanas's operations in and around the stronghold of Dreadwake's Landing, as she pursues her mysterious objective.

The ship possesses a full complement of catapults, as well as stores of the infamous Forsaken New Plague, and is commanded by Dread-Captain Graham.

The Deathbringer presumably took part in the Battle for the Broken Shore along with the rest of the Forsaken fleet dispatched to the Broken Isles, which constituted the beginning of the Burning Legion's third invasion.

The Deathbringer following its sinking

In the wake of the subsequent defeat, the fleet was ordered to the eastern region of Stormheim by Lady Sylvanas Windrunner, but was soon engaged off Stormheim's coast by forces of the Alliance. With much of the fleet in tatters, the remaining ships nevertheless continued to support Horde operations throughout the region.

Contending with both the native vrykul and now the Alliance's Gilneas Brigade, the Deathbringer was dispatched to Dreadwake's Landing in Ashild's Bay alongside the Oblivion. From here, Sylvanas assaulted the nearby vrykul village of Skold-Ashil while also successfully repelling an Alliance attack led by Genn Greymane.

Shortly after these events in Stormheim concluded, the Deathbringer was infiltrated by Alliance agents. Slaying Dread-Captain Graham and much of the crew, they also sabotaged the ship's plague cistern, causing a large explosion which sank the vessel.[1]