The Defense of Strahnbrad (WC3 Human)

The Defense of Strahnbrad is Chapter One of the Human campaign, The Scourge of Lordaeron, in Warcraft III: Reign of Chaos. 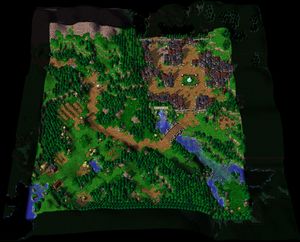 Recent orc uprisings in southern Lordaeron have forced the Alliance to take decisive measures. To contain the orcish threat, King Terenas has sent two of the realm's greatest paladins - his son, Prince Arthas, and the legendary Uther the Lightbringer - to deal with the orcs once and for all.

Uther the Lightbringer: Welcome, Prince Arthas. The men and I are honored by your presence.

Arthas: Can the formalities, Uther. I'm not king yet. It's good to see you.

Uther the Lightbringer: You too, lad. I'm pleased that King Terenas sent you to help me.

Arthas: Father still hopes your patience and experience might rub off on me.

Uther the Lightbringer: It is a father's right to dream, isn't it?
Arthas and Uther laugh together.

Arthas: Look, here's where we stand. Our scouts have confirmed that there is an orc encampment hidden somewhere over the next ridge.

Uther the Lightbringer: As I suspected...

Arthas: It gets worse. They're preparing to attack the nearby village of Strahnbrad. As far as we know, the village is completely defenseless.

Uther the Lightbringer: I need to move against the orcs' base immediately. Can you handle Strahnbrad's defense on your own?

Arthas: Of course, Uther. Don't worry about me.

Uther the Lightbringer: Good. Meet me at the orc camp once you've saved the village. Be careful, Arthas.

Note: you can visit the village to the south-west to obtain two more footmen and an optional quest.

Save Timmy - Slay the Gnoll kidnappers

- Slay the Gnoll kidnappers
Something has been agitating the local beasts lately. Just yesterday, a half-starved pack of Gnolls pillaged a local farmhouse, stealing livestock and kidnapping a young boy named Timmy. Hopefully, the cretins haven't eaten him yet.

<Increases the armor of the Hero by 1 when worn.>

Footman: It's a trap!

Benedict: Take everything, men. Take all the valuables.

Menag: Heh! We'll take their coin just like everyone else's!

Gerard: Those bandits stole my ledger. Without it, I will lose my entire farm! Please, retrieve it from their camp! It would mean so much to us.

- Slay Menag, the Bandit Lord
- Return Ledger to Gerard
The cunning Bandit Lord, Menag, has been terrorizing the lands around Strahnbrad for months. He and his lackeys just made off with a ledger full of vital information regarding the estate of the local farmer, Gerard.

Tactics: Follow Menag to his camp south-east of Gerald, killing three Bandits on the way. When you arive, Menag and his last bandits will attack Arthas and his forces. Destroy them (one of the Bandits drops a Potion of Mana); after Menag is killed, pick Gerard's Lost Ledger and go back to the cart by the bridge.

Gerard: Thank you for helping me.

Note: This tome isn't received as item in the inventory, but it increases Arthas' STR rating by 1 immediately.

Note: As Arthas approached the gates of Strahnbrad, a man ran outside fleeing from two Blackrock Orc Grunts.

Arthas: Damn! The attack has already begun! To arms, my brothers!

-Travel to Strahnbrad
-Arthas must survive
-Defeat the Slave Master and his guards
Strahnbrad may already be under attack by Orcish forces! Immediate action must be taken! Make your way to the village and slay any marauding Orcs you encounter.

Note: if after you enter Strahnbrad you go southwest you will find three footmen fighting two grunts, and you can help them win the battle.

One footman is heard shouting: "Attack!"

Note: in the northwest you will find the Slave Master and his two grunt guards.

Slave Master: Haul these wretches off with the rest of them!

Daniel: But what about the others who were taken away?

In Reforged, the name "Bloodhill Bandits" is not used and the members that appear are instead designated as members of the Syndicate.