For the Alliance ship, see The Defiant (vessel). 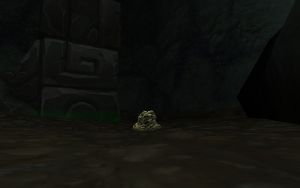 The Defiant is a wood-panel scroll leaning on the corner base of a broken mogu statue, located at [55.1, 15.9] 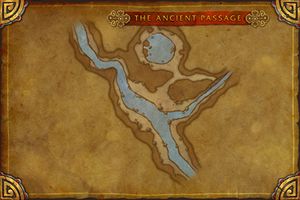 the north end of the Dark Rookery of the Ancient Passage on The Veiled Stair.

The saurok were originally dispatched to maintain order in the far edges of the mogu empire. A sauroken culture of superiority and hatred for weakness developed, fueled by the ego of their mogu masters.

Soon, saurok guards began to plunder the very people they were supposed to police. They grew disobedient, turning on their own mogu commanders whenever they were displeased with the spoils of war.

Emperor Dojan responded in the traditional mogu way: the souls were ripped from every living saurok in the Vale of Eternal Blossoms, and he demanded the same fate for the legions still in the field. So began the great Purge.