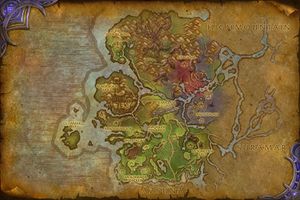 Malfurion is nearby. I can sense him..

Search the summit of Andu'talah while I continue to scour the forest.

Be swift, <name>. Time is of the essence!

My husband, Malfurion, what has become of him?!

Follow the path of stairs going up from Moonrest through Andu'talah. There you will find Malfurion trapped in corrupted vines summoned by Xavius, obviously being tormented. As you approach the circle, a short cutscene will play followed by an in-game cinematic. After the cinematic ends, Xavius will be seen riding away on Ysera's back.

Cutscene
The adventurer runs in to the inner circle, only to be snared by nightmare roots summoned by Xavius. Ysera is then seen flying towards the group.
Xavius says: Ahh, the Mother of Dreams has arrived at last.

In-game cinematic
Xavius prepares the corrupted Tears of Elune and as Ysera charges to close the distance, magically fires it at her. It pierces her chest and painfully twists into her body. A burst of Nightmare energy bursts from the wound and knocks her out of the sky. Her crash forms a crater in the ground and when she rises, she has been fully corrupted.

Cutscene
Xavius rides a corrupted Ysera. Laughs and flies away. Tyrande arrives late to the scene.
Tyrande Whisperwind says: Malfurion! Where is my beloved?

The subject of this section did not make it out of the beta stages of Legion.