From Wowpedia
(Redirected from The Dragonmurk)
Jump to: navigation, search 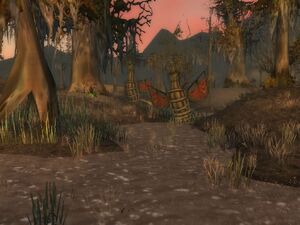 The Dragonmurk is a section of southern Dustwallow Marsh where dragon whelps and dragonspawn of the black dragonflight are very prolific. Surrounded by the Dragonmurk are the Den of Flame and the Stonemaul Ruins, both of which are also inhabited by black dragonspawn.

Only a few abandoned huts remain of the tauren outpost that once stood in the deepest and darkest parts of Wyrmbog. The inhabitants either fled or were consumed when Onyxia, an enormous black dragon, claimed the nearby cave system as the home for herself and her many children. Onyxia bore the tauren no specific ill; they just had the bad luck to be in the way. She carries great malevolence toward the Alliance, which she believes is behind the recent disappearance of her father, the ancient black dragon Deathwing. Travelers through the marsh tell tales of unfortunates abducted and tortured by Onyxia and her brood.[1]