The Druids Arise is Chapter 4 of the Night Elf campaign, Eternity's End. 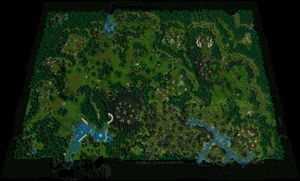 The battle began with Tyrande Whisperwind and Furion Stormrage finding a location for a base. Though they managed to find a base, they soon ran out of gold and needed to look for another source. They soon found themselves in the middle of a fierce air battle involving the Burning Legion and the Orcs. Tyrande and Furion found a tribe of furbolgs, who had gone insane after drinking from a corrupted well. Tyrande and the Night Elves put them out of their misery before finding a human base and razed it to take the gold mine, before entering the nearby forest.

The night elves discovered that the forest was corrupted and diseased, and was overrun by the undead, wolves, and the corrupted treants, and that a Revenant in the Cursed Glade was responsible for its corruption; they slew the Revenant, which restored the forest back to its natural state. Then they found out that a group of satyrs corrupted the night elf outpost made up of ancients and treants, on the orders of Tichondrius. The Night Elves then destroyed the Satyr base and put the ancients and treants out of their misery. Furion and Tyrande reached the barrows and Awakened the Druids of the Talon from their Slumber. Then Furion suggested that their next move be to Awaken the Druids of the Claw in the Barrow Deeps.

The Druids of the Talon, who sleep within the Barrow Dens, can only be awakened by the call of Cenarius' Horn. You must bring the Horn to the Dens' entrance and awaken the mighty Druids from their ancient slumber.

A local Furbolg Warlord has gone quite mad and turned his otherwise peaceful brethren into brutal killers. You must hunt down the crazed Warlord and end his tribe's rampage before more innocents are harmed.

An ancient elemental spirit has arisen in a nearby glade and placed the land under a dark pall. You must confront the wicked Death Revenant and banish it from the world. Only then will the dark spirits of this once-tranquil glade be laid to rest.

Furion Stormrage: It has been a thousand years since I last looked upon you, Tyrande. I thought of you every moment I roamed through the Emerald Dream.

Tyrande Whisperwind: My heart rejoices to see you again, Furion. But I would not have awakened you unless the need was urgent.

Furion Stormrage: In the Dream, I felt our land being corrupted, just as if it were my own body. You were right to awaken me.

Tyrande Whisperwind: The Burning Legion has returned, Furion. Cenarius is dead, and outlanders roam freely through our most sacred vales.

Furion Stormrage: As was foretold...

Furion Stormrage: No doubt Archimonde will make his way to Hyjal Summit and attack the World Tree. If he succeeds in draining the tree's energies, this world will be doomed.

Tyrande Whisperwind: My only thought was to awaken you and the rest of the druids. The druids of the talon reside within Barrow Dens at the end of this valley. If we can reach them, we may have a chance to stop Archimonde and his demons!
Suddenly, Tyrande and Furion hear the sounds of a nearby battle between a pack of humans and undead. The two elves rush over to observe from behind some trees.

Footman: That did it, boys! We've driven them off! Let's regroup back at the base and tend to our wounded.

Furion Stormrage: So, the outlanders battle against the undead as well? They could prove to be powerful allies against Archimonde and his ilk.

Tyrande Whisperwind: They are mongrels and nothing more! They are responsible for Cenarius' death! I will be damned before I stand with them.

Furion Stormrage: Perhaps you are right, my love. We will establish our new settlement here. Keep your sentries alert. I doubt that we have seen the last of the outlanders or the undead.

Tyrande Whisperwind: Our resources are depleting fast! We must find another gold mine and muster our forces! Only then will we be able to reach the Barrow Dens.

Tyrande Whisperwind: Wait! I know those furbolgs! They escaped from Ashenvale when the corruption started to spread.

Furion Stormrage: Perhaps they did not escape the corruption after all.

Tyrande Whisperwind: Then I will put an end to their curse! Andu-falah-dor!

Huntress: There is danger ahead, Priestess. Proceed with caution!

Furion Stormrage: You've changed, Tyrande. There is little mercy left in you.

Tyrande Whisperwind: Long ago, I swore to protect this land, Furion. I never had the luxury of sleeping through times of great peril.

Furion Stormrage: If your endless vigil has hardened you, my love, it must be part of your goddess' plan.

Huntress: Be careful, Priestess! These woods are overrun by the undead!

Tyrande Whisperwind: Hopefully, the land will heal itself of this cursed blight. We should get moving. The Barrow Dens lie within the valley just ahead of us.

Tyrande Whisperwind: No! The outpost has been corrupted, and the treants have been driven mad! They do not deserve this cruel fate!

Satyr: Come no further, weakling! Lord Tichondrius commanded us to kill anyone attempting to enter this place, and we shall!

Furion Stormrage: Pathetic wretches! It pains me that you once called yourselves night elves!

Furion Stormrage: Come forth, druids of the talon! Let the storm crows fly once again upon the winds of war!

Furion plays the horn and the druids awake, flying as birds. One of them reverts to humanoid form.

Furion Stormrage: Ishnu-alah, my brethren. Kalimdor has need of your powers once again, for the hour of doom is at hand.

Druid of the Talon: We are yours to command, Shan'do Stormrage.

Furion Stormrage: Now, we must delve into the earth and rouse the ferocious druids of the claw from their slumber.