The Dungeons of Dalaran (WC3 BloodElf)

From Wowpedia
(Redirected from The Dungeons of Dalaran)
Jump to: navigation, search

The Dungeons of Dalaran is chapter 3 of Curse of the Blood Elves. It occurred hours after A Dark Covenant. Prince Kael'thas Sunstrider and his followers had been arrested by the forces of Lord Garithos for allying themselves with the Naga, despite the fact that without their aid, Kael and the blood elves would've been destroyed by Dalvengyr and the Scourge.

Two days later, within the magically shielded dungeons of Dalaran, Kael'thas and his blood elf brethren languish in their cells, awaiting their inevitable executions.

Garithos has imprisoned your Blood Elf Lieutenants within special magical cages. Break them free so that they can release your brethren and prepare for the upcoming battle with Garithos.

The old Jailor of the sewer prison of Dalaran blocks the final gate barring you from the surface. Kill him and those guarding the gate with him so that the wrongfully imprisoned Blood Elves can push the fight into the city.

The ghosts of the Archmagi slaughtered by Arthas during the destruction of Dalaran still haunt the decrepit ruins of the prison. Find their trapped spirits and slay them to release their tormented souls and give them peace.

Prince Kael'thas: How could I have let this happen to my brethren? Locked in these cells, our thirst for magic will devour us.

Guard Marcus: It'll all be over soon, traitor. Lord Garithos plans to execute the lot of you at dawn.

Guard Trogdar: Sunrise can't get here fast enough. These elves give me the creeps.

Guard Marcus: Don't worry. This prison was built by the Kirin Tor to keep their pets from getting loose. The elves' magic is useless inside those enchanted cells.
Lady Vashj slithers up from some green water in the prison. She kills both guards with forked lightning and breaks the door to Kael's cell.

Lady Vashj: Greetings, Kael. I assume we're not too late.

Prince Kael'thas: On the contrary, Vashj. Your timing is impeccable. Once again, I am in your debt. But even if we free my brethren, there is nowhere to run. Garithos' forces outnumber us ten to one.

Lady Vashj: You stand at a dangerous crossroads. You can either stay here and be slaughtered by human hands... or choose a darker path... to freedom.

Prince Kael'thas: What is this darker path?

Lady Vashj: In the city above us stands a portal--a gateway that leads to other worlds.

Prince Kael'thas: Yes, I know it. The lich, Kel'Thuzad, opened it to bring Archimonde here.

Lady Vashj: Yes. My master, Illidan, awaits us on the other side of that portal! Lead your people to him, and he will forge you a new destiny. He will sate your people's burning hunger.

Prince Kael'thas: Side with a rogue demon... or lead my people to their certain deaths. There is no choice here, Vashj. We'll have to free my lieutenants first. They'll be able to rally the others while we assault the exit.

Lady Vashj: As you will.

Guard Troy: We don't have to. We can loose these creatures on 'em!

Jailor Kassan: You've gone as far as you're going to go, Prince Kael. Make it easy on yourself.

Prince Kael'thas: You served the Kirin Tor well, Kassan, but the old order has passed away. My people and I are leaving this damned prison one way or another.

Jailor Kassan: It's a shame to see a good wizard gone bad. Do what you have to do, lad.

Prince Kael'thas: Arthas murdered a number of Archmagi when the Scourge ravaged this land. Now the wizards' invisible spirit can find no rest. Perhaps, we should track them down and give them peace.

Prince Kael'thas: I sense something... elusive.

Prince Kael'thas: Alright, men. Pull back, back to the portal!

Prince Kael'thas: My brethren are assembled, Vashj. Now all we need to do is reach this portal of yours and--

Lady Vashj: Hold, good prince. We will need to keep the portal open long enough to usher everyone through. But Garithos' forces will likely attack it before we can make our escape.

Prince Kael'thas: Then I will hold him at bay. I'll buy you all the time you'll need.

Vashj broke Kael out of his magical prison, where he was held and awaiting execution. Together they released Kael's lieutenants, as well as some of his forces, which not only had to face the Dungeon's jailors but also creatures once kept by the Kirin Tor for experimentation and the ghosts of the Archmages killed by Arthas during the Siege of Dalaran.

Kael and Vashj were forced to kill Kassan, the Dungeons' warden and an old friend of Kael, in order to reach a dimensional portal, the one opened by Kel'thuzad to release the Burning Legion, and scape to Outland but to do that they needed to buy time holding Garithos at bay while the Blood Elves escaped through the portal. 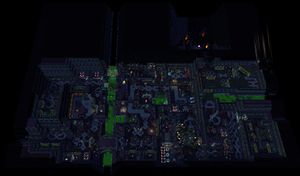