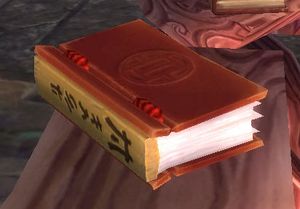 It is translated by Lorekeeper Vaeldrin.

It was the Sovereign Emperor, Dojan Firecrown, who brought the legions down upon the Krasarang Jungle, crushing its defenses and adding it to the empire.

Krasarang was the last of the freeholds, a festering jungle of brigands and rebels, seeking to hide from his grace's wrath.

The true prize though was the legendary Pools of Youth. The Firecrown was late in his years and dreamed of the power such pools could provide if under his sway.

With this conquest, the Firecrown used his new thralls to construct the Dungeons of Dojan. It quickly became one of the most feared and renowned dungeons in the known world. Fortified with countless traps and weaponry, it showed the empire that the Firecrown would not endure the insult of rebellion.

To ensure their reputation, the Imperial Magisters crafted wards and arcanic oubliettes in great number. Those foolish enough to try and use a magic portal to assault the seat of the empire would quickly find themselves redirected to an arcanic oubliette or worse.

In time, the only successful teleportation magics of the region were limited to the nearby port of Korja.