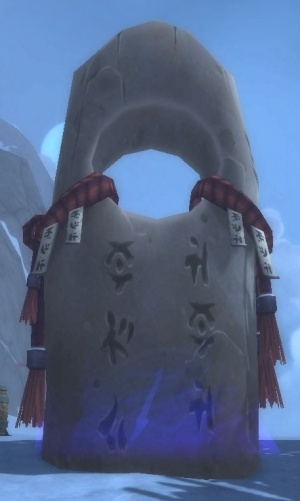 behind Lorewalker Cho, leaning against a tree at Seeker's Point, halfway up Mount Neverest in central Kun-Lai Summit.

It was at this location ten thousand years ago that Shaohao, the last emperor of Pandaria, sought out the counsel of the Jade Serpent.

From the Book of Burdens, Chapter 3:

"Forlorn and without hope, the Last Emperor ascended the sheer slope of Mount Neverest. Daggers of cold sliced through his silken robes, and the biting wind heaped scorn on his journey."

"Only at the very peak of the mountain did the emperor find quiet and solace, and here he spoke with the Jade Serpent, the spirit of wisdom."

The Jade Serpent urged Shaohao to divest himself of his burdens, to purify his spirit, and to become one with the land.

The Emperor was perplexed by the Jade Serpent's council, but no further answers were to be found atop the frigid peak. Dejected, Emperor Shaohao trudged back down the mountain to consult his companion, the Monkey King, and determine his next move.