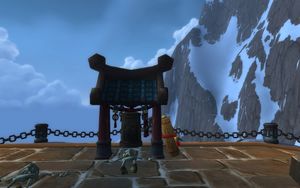 "The Emperor's Burden - Part 7" is part of a series of in-game books called The Emperor's Burden. It can be found as a wood-panel scroll leaning against a bell shrine, southeast of the main entrance to the Shado-Pan Monastery at [41.0, 42.4]

in the big gazebo.

The Shado-Pan order was founded ten thousand years ago under a charter from Shaohao, the Last Emperor of Pandaria.

Emperor Shaohao knew that the dark energy of the Sha - the physical embodiment of negative emotions like anger, fear, hatred or doubt - represented a great threat to the pandaren if allowed to fester beneath the land. He tasked the greatest warriors of Pandaria with the duty to restrain and control the Sha.

On this very location, mere hours after Emperor Shaohao bested his own anger, hatred, and violence, the first of the Shado-Pan took their knee and spoke an oath to the Last Emperor. The same words have been spoken by every Shado-Pan initiate ever since, for the last ten thousand years.