For the pre-cataclysm version, see 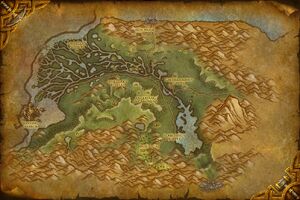 Opening the chest reveals a blackened orb, pulsing with an eerie light. This must be the foul

[Eye of Paleth] that damned these sailors' souls.

Such corruption should be purged. Perhaps a priest in Menethil Harbor could help you.

You will also receive: 15

The Eye of Paleth? You say Fitzsimmons sent you out?

By the light... not again. Fitzsimmons is dead, lad. You're not the first to come to me like this, either.

This is largely a reference to the pre-Cataclysm quest chain, wherein the player character DOES bring the cursed eye in to get it cleansed.