The Eye of the Jailer

The Eye of the Jailer has six stages, each with increasing threats: 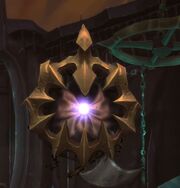 Mawsworn Soulseekers are normally neutral mobs in a few quest areas. At level one, they turn hostile.

Towers will spawn a ~10-yard radius white swirly underneath the player. Get well clear of it or Soul Surge will hit for 50% of max health and spawn five Shackles to snare the player:

Shackles — Remove the shackle spike, or move at least 20 yards away from the Shackle Spike to break the shackles. 60 sec debuff. 50% run speed debuff. Click on the Shack Spike NPCs or run away.

Assassins are level 60 humanoids with a handful of abilites that will spawn following some telegraphs:

You are being hunted.

Hunted — You are being hunted. An assassin will strike when you next enter combat. Undispellable debuff

The next time the player enters combat, an Assassin will spawn and aggro on the player:

The Jailer says: The end is upon you.

Defeat it for a

Same mechanics as the assassins, but this time they're elite Stygian Abductors.