The Falcon's Essence is part of the Druid's Swift Flight Form quest chain.

Defeat the Guardian of the Falcon, obtain the

[Essence of the Falcon]. Use

If you lose Arthorn's Sparrowhawk Whistle, return to Arthorn Windsong at the Evergrove for a replacement. 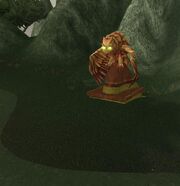 Shrine of the Falcon

<The bird speaks with Arthorn's voice.>

The second spirit bound by the raven's followers was the falcon.

It was subdued and imprisoned close to Skettis as a reminder to the raven-priests when they held power. On the shores of Lake Ere'Noru, to the northwest of Skettis, you'll find the falcon's shrine.

To overcome the falcon's guardian, you'll need to use the falcon's strengths to your advantage. Use the speed and grace of your cat form to defeat the guardian before it reaches full strength!

<Once again, Arthorn's voice issues from the sparrowhawk.>

Do you have the falcon's essence?

Well done, <name>. I'd feared that the falcon's prison had been destroyed in the explosion of Auchindoun. We're almost prepared to confront Anzu, <name>. I'd love to go with you, to be there when this self-styled "god" is cast back into the pit that spawned him!

The shrine is pretty much right where the quest says it is, on the shore of Lake Ere'Noru.

This guardian is pretty much a DPS race. The guardian casts a debuff on you ('Mark of Anzu') every so often that increases your magic damage taken by 10% each time it stacks, so the longer the battle goes, the more damage you will take.

While it doesn't directly matter which form you use to do your damage, this guardian does more ranged damage than he does in melee. He occasionally uses a knockback spell (Twisting Blast) that will throw you back a ways. You will want to position yourself so that you are knocked back into a wall rather than into the water.

Cat form often has the best DPS ability, but Moonkin form may also be useful if available. If you prefer humanoid form, remember that shapeshifting breaks the polymorph that he also casts. (If you are already shapeshifted, the polymorph has no effect on you.)

[Maim] can be used for a respite, long enough to get a heal or two off.