The Fall of Shai Hu 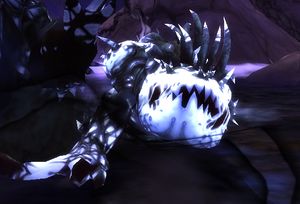 Defeat Shai Hu. He can be found at the Waterspeaker's Sanctuary, the island in the center of Inkgill Mere in Kun-Lai Summit.

I can hear the voice of the Mere - it has been purified.

But, this chapter in my people's history will never be closed - not until we defeat Shai Hu.

He has retreated to the central island in the Mere, corrupting our holiest of sites.

Beware - he is strong. But, after all we have done, I am confident we will be stronger.

(Shai Hu: "The corrupter of the Inkgill Jinyu. He must die if they are to be redeemed.")

Thank you, <name>. You have assured that this corruption will not spread, and that my people - those who have not been corrupted - will be able to live on and found a new village.

Our history will live on. You have done more for us than we ever could have hoped.

Waterspeaker Gorai yells: My people, here <he/she> is! The one who gave the Inkgill new life, <name>!
Inkgill Refugee yells: All hail, <name>!
Waterspeaker Gorai says: Thank you again, friend. We will remember your name in our people's history.

Shai Hu is in the middle of the island, but the Explosive Hatred on the outside edge of the island respawn nearly instantly. Pull one, run through it, then stop at the stone ring surrounding Shai Hu, finish it off, then aggro the named when ready:

Shai Hu is a level 87 elite jinyu with 516,000 health and the following abilities:

Littering the area are Explosive Hatreds, level 87 sha with 85,994 health and the following ability:

Shai Hu can be damaged normally, up until he pops an immunity shield at 50% health.

Shai Hu yells: YOUR FEEBLE ATTACKS MEAN NOTHING!
Waterspeaker Gorai says: The death of an Explosive Hatred should destroy his shield! Quickly!

Kill one to pop the shield:

Shai Hu yells: NO! IT CANNOT BE! YOU CANNOT STOP ME!

This completes the "Inkgill Mere" portion of