The Fall of Silvermoon (WC3 Undead)

From Wowpedia
(Redirected from The Fall of Silvermoon)
Jump to: navigation, search

The Fall of Silvermoon is chapter 5 of the Path of the Damned campaign.

It involves the final stand of the outnumbered high elves under Sylvanas Windrunner against the overwhelming might of the Scourge led by Arthas. It would see the high elves nearly annihilated, their kingdom and capital city in ruins, their greatest commander converted into undeath, and the fount of their magical powers defiled by Arthas to resurrect Kel'Thuzad.

Moments later, on the outskirts of the elves' capital of Silvermoon... 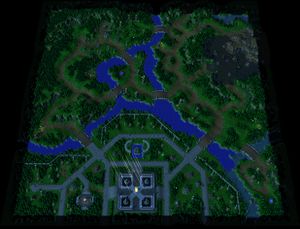 (Sylvanas appears twice on this map; the one closest to the Undead base appears at the start of the mission in an early attack and is permanently killed by the player, leaving only a single Sylvanas, who conveniently doesn't need to be revived at an altar before being seen.)

The time for Kel'Thuzad's rebirth is at hand! You must place the Urn containing the Necromancer's remains within the Sunwell's sacred waters. Only then will Kel'Thuzad live again, to serve the Lich King.

Sylvanas Windrunner, the Elves' Ranger-General, has harried your efforts long enough. The time has come to deal with the Elf-woman as she deserves. Hunt her down and put an end to her defiance!

Sylvanas intends to warn Silvermoon of your approach. If any of her runners reach the city, the Elves will be alerted to your presence and attack. You must use your Gargoyles to intercept her runners before they reach the capital.

Tichondrius appears in Arthas' base.

Tichondrius: You've done well... so far. But the true test still lies before you.

Arthas: I was wondering when you'd show up.

Tichondrius: I am here to ensure that you do your job, little human. Not do it for you.

Arthas: I will reach the Sunwell on my own, dreadlord.

Tichondrius: Be warned. It is a pool of mystical energy from which the elves draw their immortal powers. They will not give it up easily.
Tichondrius teleports away.

Arthas: Do you think that he suspects that you've been aiding me, necromancer?

Kel'Thuzad: I'm sure he suspects quite a bit. It is his nature to assume the worst. Now steel yourself. The hour of my rebirth draws near.

Sylvanas Windrunner: Did you forget about us, you wretches? Bash'a no falor talah!

Kel'Thuzad: She is persistent. Reminds me of you, death knight.

Arthas: Shut up, you damned ghost.

Arthas: Then watch for her runners! None of them must get through!

Necromancer: Lord Arthas, Sylvanas has sent a runner to Silvermoon. The elves are sure to send more forces at us!

Arthas: The gargoyles we brought back from Northrend could be useful here. The beasts can spot their runners along the main road.

Arthas: I salute your bravery, elf, but the chase is over.

Sylvanas Windrunner: Finish it! I deserve... a clean death.

Arthas: After all you've put me through, woman, the last thing I'll give you is the peace of death.

Sylvanas Windrunner: No! You wouldn't dare!
Arthas tears Sylvanas' spirit from her body, transforming her into a banshee.

Arthas: Citizens of Silvermoon! I given you ample opportunities to surrender, but you have stubbornly refused! Know that today, your entire race and your ancient heritage will end! Death itself has come to claim the high home of the elves!

Arthas: Now, arise, Kel'Thuzad, and serve the Lich King once again!
The ghost of Kel'Thuzad enters the well, tainting it and causing him to be reborn as a lich.

Kel'Thuzad: I am reborn, as promised! The Lich King has granted me eternal life!

Arthas: I've upheld my end of the bargain, lich. Are you ready to tell me about the dreadlords now?

Kel'Thuzad: Certainly. But not here. They have eyes and ears everywhere. We'll talk where it's safe.

Although the Elven Ranger Corps fought bravely against the relentless onslaught of Arthas' Scourge, the elves were unable to keep the Death Knight from seizing the Key of the Three Moons and pushing into the Inner Kingdom. Arthas wasted no time in fortifying his position to the southwest of the city. Sylvanas then set up her own base across the river from Arthas' right flank and began leading strikes against the Undead.

As the battle began outside the Undead base, word reached Arthas that Sylvanas was sending runners (by foot for some reason) to alert Silvermoon of the attack and summon reinforcements. Arthas however, had anticipated this and positioned Gargoyles along the roadways. The flying beasts quickly and easily slew every runner sent, keeping Silvermoon in the dark and ensuring that Sylvanas would receive no reinforcements.

After beating back several assaults by Sylvanas, Arthas advanced his forces to the bridge between his and Sylvanas' camps where fierce fighting ensued. After a brief yet bloody stalemate, the Scourge gained the upper hand. As the attacks began to wind down, Arthas and his forces charged into Sylvanas' camp, slaughtering all in their way. Sylvanas' warriors fought bravely to the last man, but were inevitably overwhelmed. As her base crumbled around her, Sylvanas was personally approached by Arthas. Before she could load her bow, the Death Knight cut her down. In sadistic retribution for resisting him so fiercely, Arthas transformed Sylvanas into a banshee, binding her to the Lich King's will.

With the Ranger Corps destroyed, nothing stood between the Scourge and Silvermoon. Arthas and his forces regrouped, reinforced and marched on the city's gates. As the Undead approached, dragonhawk riders plummeted down upon the Scourge and rained missiles upon them, inflicting heavy casualties. Yet even these elite warriors fell victim to Arthas' Crypt Fiends who ensnared them in webbing and forced them to the ground where they were easily destroyed by Scourge warriors. Entering the city itself, the Undead encountered fanatic last-ditch resistance from the elves. Yet despite their fury, they could not hold back the dead, who rolled over them like a wave of carnage. Even the powerful arcane constructs built to protect the Sunwell could not hold out for long against the horrid wave of Undead. As the final defenders were wiped out, Arthas placed Kel'thuzad's remains in the Sunwell, resurrecting him as a lich and fouling the well. Quel'Thalas had ceased to exist as a nation.

A few lucky elves managed to evade their undead pursuers and escape into the wilds. These hardy survivors would eventually band together under Prince Kael'thas Sunstrider and become the blood elves.

Building an high elven army as the Scourge.

During Reforged, the entire map has been revamped and several changes have been made.