I haven't left the deck of this ship since we got back. The fleet must be made ready for war. Don't know where we will be needed, but when the call comes, we'll be ready.

Truth be told... I welcome the distraction. The others are paying their respects to Varian, but I... I cannot bring myself to face that casket. To face his son.

Varian gave me a letter he wrote to Anduin. Please, take it to him on my behalf.

War rages in my heart, <name>. We will have vengeance... for Gilneas, and for the Alliance!

Why not deliver the letter yourself, Lord Greymane?

I've seen enough suffering for a lifetime, <name>. I don't need another funeral. I need to bring justice to the enemies of Gilneas!

Welcome, <name>. I am pleased you survived the battle. You have something for me?

<Anduin sighs and reads the letter from his father. Tears well in his eyes. He is silent for several moments.>

Thank you for bringing this to me, <name>, it means... more than I can say. I wish Greymane felt he could present it himself, but his mind is fixed on revenge.

I cannot blame him... or Jaina, for that matter, but we must find a better way.

Enough of such talk. It is good you are here. We will need heroes like you in the many battles to come.

Jace Darkweaver runs in from the war room and stands at the foot of the dais. Malfurion and Tyrande turn to look at him.
Malfurion Stormrage says: Having the Illidari among us makes me uneasy. Their kind has been locked away since my brother's fall.
Tyrande Whisperwind says: I understand, husband. But for Maiev to release them, the situation must be even more dire than we know.
They both turn back to the casket.
Jace Darkweaver says: I bring urgent news, My King. Danger is all around you!
Anduin Wrynn says: I will hear what this demon hunter has to say. 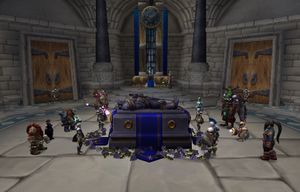 The Alliance leaders mourn the death of Varian.

Lady Jaina Proudmoore says: King Anduin, the hero of the Broken Shore approaches.
Anduin Wrynn says: At last, some good news on this day of sorrow.
Prophet Velen says: His valor inspired us all, even in death. His spirit will be with us, always.
Muradin cries.
Muradin Bronzebeard says: I can't believe he's really gone.
Falstad Wildhammer says: He died with honor, protecting his people. He was a true king.

Listen... can you hear it? The skies weep and thunder for King Varian.

I know what the lad is going through. I too have lost a father... and a king.

The Light has lost a powerful ally. I have lost a good friend. Yet we must carry on.

He led with grace and courage. We were fortunate to have an ally like King Varian.

We have lost, and now must find balance, despite our shared grief.

I'm proud to have fought beside him. Varian was a good man.

King Varian overcame so many trials. We should all learn from his example.

Speak with Anduin
Welcome back to Stormwind, <name>. I'm relieved you survived the Broken Shore.

We could not afford to lose you!

I come bearing a letter from your father. 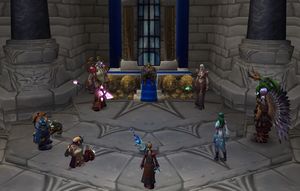 The leaders of the Alliance congregate in front of the throne of Stormwind. Muradin comes up instead of all three for the Council of Three Hammers.
Anduin Wrynn says: My father was a seasoned strategist, yet his army was shattered on the Broken Shore. How can I hope to succeed where he failed?
Prophet Velen says: You are not alone in this, My King. We stand behind you.
Tyrande Whisperwind says: And with the return of the Illidari, we have a valuable weapon on our side. You were wise to accept them into Stormwind, King Anduin.
Lady Jaina Proudmoore says: Have you forgotten the Horde's treachery? It's time to bring them to heel like the dogs they are!
Prophet Velen says: To fight two wars at once would be folly. For all our sakes, we need the Horde's strength added to our own.
Anduin Wrynn says: Velen is right. We must stand beside the demon hunters and focus on the Legion. Now is not the time to--
Lady Jaina Proudmoore says: The Horde betrayed your father and left us to die! To fight alongside those cowards would dishonor everything he stood for.
Prophet Velen says: My people know the price of facing demons as a world divided. It is time to unite our forces and defend our lands.
Anduin Wrynn says: Agreed. I'm sorry, Jaina, but vengeance must wait. I trust you're mobilizing the Kirin Tor as we discussed?
Lady Jaina Proudmoore says: Dalaran will help protect the Eastern Kingdoms, but I will NOT allow the Horde to set foot within my city!
Anduin Wrynn says: We must not splinter like this... not now. Please, Jaina!
Lady Jaina Proudmoore says: You disappoint me, King of Stormwind. But sooner or later, you will see the truth. You all will!
Jaina teleports away. The other leaders return to their places around the casket.
Anduin Wrynn says: My father dead... disaster on the Broken Shore... Jaina fixed on revenge... Everything is falling apart.

The loss of King Varian will not go unavenged. My people will see to that!

There's no clean solution, and no way back. King Varian will be missed.

Speak with Anduin
Please, champion, tell me what happened at the Broken Shore.

I have a letter from your father, as well as news of the battle.