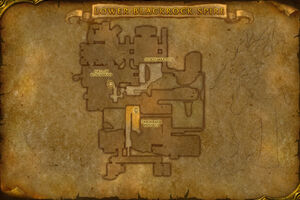 Rend Blackhand was the son of an Orc Warchief. His father was slain by Orgrim Doomhammer, who became the new Warchief over the young orc. Rend now stands as the supposed leader of a false Horde of Blackrock orcs, back by Nefarian and his army of dragons.

The fool claims that the Horde is also his by birthright, and threatens to take it by force! We cannot allow this to occur in light of his master's influence. Find him in the Upper Spire and bring an end to the false warchief, <class>.

Rend will not fall without a fight.

You saw Nefarian when you fought Rend?

I wish I had accompanied you, then. I could have faced him unaware, outside his lair... but no matter. Nefarian will die by my claw.