When we began excavating the city, I sent Surveyor Orlond to check the stability of the tunnels in Thor Modan. I didn't see him escape when we withdrew at the beginning of the battle, and I worry he may still be trapped inside the city.

If we're going to get an army through Thor Modan, we'll need the information he was collecting. Stoutmantle and his superiors would have my hide if the tunnels collapsed on one of their brigades!

A quick examination of the body reveals that the surveyor has been dead for some time. Looking through his pack, you stumble upon Orlond's handwritten notes. 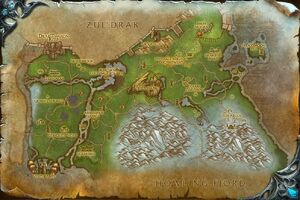 . With the ability to fly in Northrend, he can be reached by flying through the open ceiling of Thor Modan, to avoid wading through all the mobs.

Into the Breach also takes one into Thor Modan, and so combines well with this quest.