The Fires Down Below (WC3 demo)

The Fires Down Below is chapter 4 of the Exodus of the Horde campaign.

Thrall, finding himself a prisoner of the murlocs in a cavern, combines forces with jungle trolls to escape. During their escape, Sen'jin was sacrificed by a Murloc Sorcerer and although it was killed the cave began to quake and the Horde had to escape.

Thrall finds himself in an underground lair, held prisoner by the murlocs and separated from his companions. 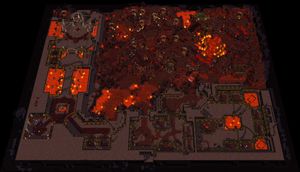 Thrall: "I wonder what these strange fish-creatures want with us?"

Troll Headhunter: "The murlocs used to be peaceful, but lately they been catchin' us and usin' us for sacrifices."

Thrall: "Sacrifices? To what?"

Troll Headhunter: "A long time ago they started worshipin' some witch. They say she lives under the ocean, and if they don't make the sacrifices, she'll destroy this island."

Thrall: "Well, someone should have told them that orcs don't scare that easily. Now, let's get out of here!"

Grunt: "Warchief, Sen'Jin was just taken away by the fish-creatures! I tried to stop them, but there were too many. They said he is to be sacrificed to their witch!"

Thrall: "Then we have no time to lose! Sen'Jin must be freed!"

Shaman: "Warchief, I sense a protective shield around the sorcerer. I believe these three fish-creatures are helping maintain it."

Murloc Sorcerer: "Pathetic fools! You will not stop us from receiving what has been promised."

Murloc Sorcerer: "The exalted one would be most displeased if I allowed you to escape. Her will must be done!"

Thrall: "Perhaps you and the witch can discuss it in the afterlife."

Sen'Jin: "The vision told me you would lead my people off this island."

Thrall: "But you and your people are coming with us!"

Thrall: "Those of you who wish to follow me will face many dangers. It will not be easy. But if you wish to join us, you're welcome."

Troll Headhunter: "Yah, mon, pretty soon there be nothing left here anyway. We come with you."

Sea Witch: "Make peace with your gods, land-dwellers! You cannot escape the currents of death so easily!"

Grunt: "Where is that voice coming from?"

Thrall: "I don't know, but we have no time to waste. This cave is about to collapse!"

After escaping from his cell Thrall moves forward rescuing Orc and Troll prisoners, even as he leads them against the Murlocs and other creatures. At one point in their march to rescue Sen'jin and escape, Thrall witnesses a massive jailbreak of trapped Alliance forces. Deciding to hang back, Thrall allows for the Murlocs and Alliance to significantly weaken one another before deciding to moving in to finish off the survivors. Soon after he frees the last of the prisons but discovers that the Murlocs just took Sen'jin in order to sacrifice him. With this knowledge in hand Thrall quickly moves forward to save Sen'jin but is ultimately too late. With Sen'jin avenged and the Darkspear apart of the Horde (per Sen'jin's dying wish), Thrall leads the survivors to the surface in order to reunite with the rest of the Horde.