The Fist of Ra-den is one of the artifacts used by elemental shamans in World of Warcraft: Legion. Equipping it will automatically place

[The Highkeeper's Ward] in your off hand.

The Fist of Ra-den is obtained from

Aman'Thul the Highfather, leader of the titan Pantheon, entrusted his greatest servant, Highkeeper Ra, with this artifact, which could channel the fury of the storms. Ra used it to bestow life on the titan-forged mogu race, and he wielded it in battle against the Black Empire for years beyond counting. Later lost to Ra, the weapon was ultimately recovered by the August Celestial Xuen, who saw its immense and dangerous power, and chose to safeguard it until someone worthy could take up the weapon in a righteous cause once again.[1] 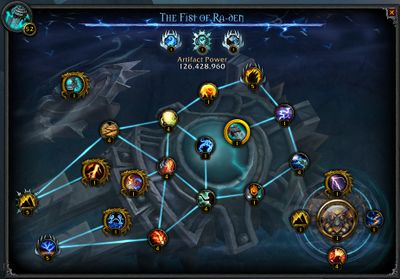 War-torn: Fist of the Fallen Shaman

Hidden: Prestige of the Amani 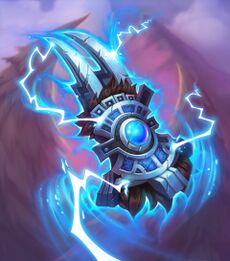 The Fist of Ra-den in Hearthstone.

The Fist of Ra-den appears as a legendary weapon for the shaman class in the Galakrond's Awakening adventure for Hearthstone. Its flavor text reads: "The mighty Ra-den was known as the Keeper of Storms. Unfortunately, he could not keep his fist."