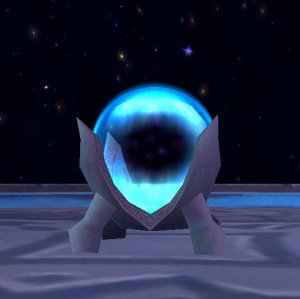 The Focusing Iris is an orb found in the center of the Eye of Eternity and is used to summon Malygos. An ancient artifact of the blue dragonflight,[1] it is an item of immense arcane power.[2]

Keys to the Focusing Iris are held by the most ancient members of the blue dragonflight. At minimal power, they can be used to open the iris a fraction, drawing Malygos's ire.[3] Adventurers of the Alliance and Horde did so during the Nexus War which allowed them to engage and kill the blue Aspect with the help of Alexstrasza.

Malygos had used his own blood to activate and control this orb, which had lain dormant for millennia. With the open Focusing Iris, Malygos had been able to direct (and create[4]) powerful surge needles, using them to pull arcane magic from Azeroth's ley lines and channeling that magic into the Nexus.[5] The slain Arygos' blood, he being a son and direct blood relative of Malygos, was used by Aedelas Blackmoore to use a surge needle (with energies flowing from the Nexus) to animate Chromatus.[6]

It was previously mentioned that once harnessed, the energies are focused through the Nexus' ascending rings and blasted into the Twisting Nether.[7] In Thrall: Twilight of the Aspects, this function of the Nexus is not mentioned. It is implied that the diverted energies were stored there.

As part of the Dragon Soul raid introduced in patch 4.3.0, adventurers have to get the Focusing Iris so the Dragon Aspects can refocus their power into the Dragon Soul to use the Demon Soul artifact against Deathwing.[8] 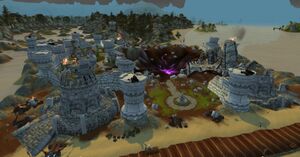 The power of the Focusing Iris-empowered mana bomb.

Reflecting on its misuse in the past and its potential for future misuse, Kalecgos ordered the Focusing Iris moved to a more secure location - encased in enchanted ice, magically warded, and dumped at the bottom of the Frozen Sea. However, the dragons sent to escort it were ambushed and killed by members of the Horde, who stole the Focusing Iris and used it to augment a mana bomb built by Thalen Songweaver to obliterate Theramore Isle.

While walking through the ruins of her city, Jaina Proudmoore discovered the Focusing Iris at the bottom of the blast crater, and decided to use it to exact vengeance on the Horde. Studying a book of powerful magic originally discovered by Antonidas, she went to Fray Island and used the Focusing Iris first to summon thousands of water elementals, and then to bind them together into a massive tidal wave with the intention of destroying Orgrimmar. After being talked down by Thrall and Kalecgos, she returned the Focusing Iris to the latter, who decided that the safest place for it would be in the Kirin Tor vaults in Dalaran.[9]

The Focusing Iris is stolen from Dalaran's vault by Archmage Xylem, whose mind has been eroded by a grimoire he found in the Legash Encampment and who now serves the Burning Legion. He seeks to use it to become the most powerful mage ever. When Xylem is confronted by an adventurer sent by Kalecgos, Xylem flees through a portal with the Iris.[10][11]

Xylem fled to the Eye of Eternity, where he could use the Focusing Iris to wreak untold havoc on Azeroth's ley lines and siphon their energy directly into himself. Drained of magic, Azeroth would be ripe for destruction by his demon masters and his power would become limitless. However, Xylem's sanity was eventually restored and the Focusing Iris returned to Dalaran.[12][13]