The Forgotten Ones (WC3 Undead)

From Wowpedia
(Redirected from The Forgotten Ones)
Jump to: navigation, search

The Forgotten Ones is chapter 7, mission two, of the Legacy of the Damned.

Moments later, within the Inner Kingdom...

As King Arthas and Anub'arak lead the Scourge through Azjol-Nerub to reach Icecrown the pair encounter more Nerubians and even the Faceless ones who do all they can to prevent their escape. After fighting their way through their enemies the Scourge end up coming accross a Forgotten One to Anub'arak's shocked horror. After a fierce fight the Scourge is able to kill it, but are forced to flee from the approaching Faceless ones as they decide the best course of action is to get to Icecrown asap.

The ice cracks, and horrific noises erupt from the depths of the Old Kingdom. Though the horrors within this place are fierce you must fight your way through to the exit. Let nothing stand in your way.

Bursting forth from the ice, an unfathomable horror of a long forgotten time has emerged to block your passage. Destroy it and break free of the Old Kingdom.

The rebel spiders captured several Crypt Fiends! They're being held in a nearby chamber. Release them, and they will be yours to command.

Gold Coins have been hidden throughout these underground chambers. Find them for an increase of your gold coffers. This would be useful the next time you require gold to sustain and build your forces.

Anub'arak: We have entered the Old Kingdom. Be wary, death knight. Whatever scared the dwarves still lurks down here somewhere.

Anub'arak: Wait--the towers on either side are rigged to fire bolts of frost. This hallway is a deathtrap.

King Arthas: Can't we disable them?

Anub'arak: The circular hatch in the far wall is an aqueduct plug. If we can open it, the water might flood the firing mechanisms and disable the entire trap.

King Arthas: Who, me?

Anub'arak: He is referring to me, death knight. These nerubians will stop at nothing to destroy us!

King Arthas: The guardians are activating! Defend yourselves!

Anub'arak: The eggs of our young are incubated within those breeding pods. There's no telling how many vicious hatchlings they hold.

King Arthas: You were right--they're definitely hostile! We've got to destroy the breeding pods!

Anub'arak: We could also seal the doors to shut the hatchlings in!

King Arthas: What the hell are they?

Anub'arak: They are the horrors the dwarves spoke of. I thought they were only legends.

Anub'arak: They are the faceless ones...

Anub'arak: A forgotten one. Look to your defenses, death knight! Fight as you've never fought before!

Crypt Fiend: Thank you, great one. The rebel spiders captured my comrades as well! They're being held in a nearby chamber. Release them, and they will be yours to command.

Anub'arak: We cannot take them all! Hurry, death knight--up the stairwell! Hurry! 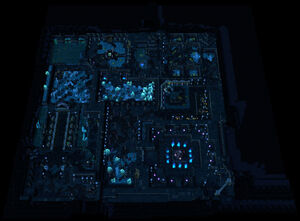