[Shield of the Stockades] or 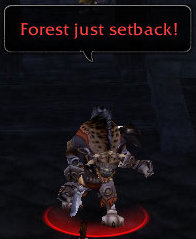 What was Elwynn, Hogger?

<Name>, I'm afraid I must ask of you the impossible.

I received my eyepatch because he willed it so. Countless thousands have perished to his wrath. It was only by sheer miracle that we were able to imprison him here.

Doing so was a grave mistake. We held out as long as we could, but then they came. From the shadows and darkness, gnolls in the service of Hogger ripped my best men to pieces.

You must defeat the Gnoll King, lest he mounts another attack and slaughters us all in cold, bloodthirsty rage.

Have you defeated Hogger?

You have performed a deed this day unlike any I have seen in my long career. Hogger's death will plague the Riverpaw for years to come, and hopefully put an end to their attacks on our people.

Greatest of heroes, please take this as a sign of my eternal gratitude.

You will also receive: 73

[24] By Fire Be Saved! before heading into the riot. Take a left at the fork (heading west) to enter the gnoll portion of the Stockade.