The Great Akazamzarak is a goblin magician normally found entertaining some Dalaran Citizens at the Eventide in Dalaran. He is an expert with portals and teleportation and is therefore recruited by the Tirisgarde in order to teleport its members inside the Hall of the Guardian, bypassing the security wards. 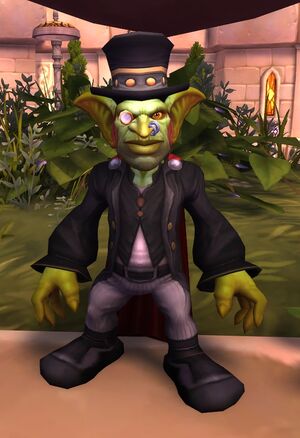 Akazamzarak in World of Warcraft.

Starting with patch 7.2.0, you can mute Akazamzarak in Dalaran by talking to him.

Hey buddy, don't you know better than to interrupt a performer during his show?

Could you be quiet?

Afterwards, you can talk to him again to undo muting him.

You again?
Look, I don't come to your place and tell you how to <class>, so why don't you just scram? 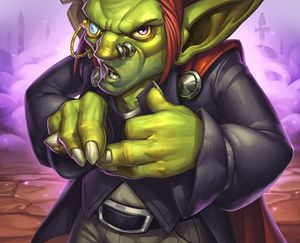 Akazamzarak appears as one of the bosses that can be encountered in the Dalaran Heist single-player experience in the Rise of Shadows expansion for Hearthstone.

Furthermore, he is seemingly depicted in the card art for the rare mage spell Magic Trick.