From Wowpedia
(Redirected from The Great Forge)
Jump to: navigation, search 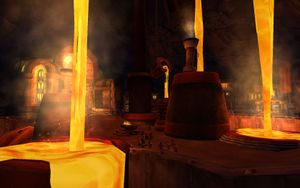 The Great Forge (situated in the Great Forge District)[1] is the heart and soul of dwarven culture, where ingenious creations and weapons are made. Located at the center of the city, it gave the ancient dwarf capital its name.[2]

At its center is the famed Great Anvil, where most of the best dwarven blacksmithing trainers can be found. Ringed around the Great Forge are several foundries pouring molten slag and a great deal of shops and guild offices, including trainers for cooking, mining, first aid, tailoring and leatherworking, as well as the High Seat, the court of the King Magni Bronzebeard. Ironforge's gryphon master is also located here. The current keeper of the Great Forge is Myolor Sunderfury.

It was here, upon the Great Anvil itself, that the legendary blade Ashbringer was forged by King Magni.

Shops found on the outer edge of the Great Forge:

At Ironforge's bottom there is a molten pit called the Great Forge. Anvils on pedestals circle the pit, each manned by an Ironforge master smith diligently hammering weapons or mail. The Great Forge is a wonder of the known world, and many young smiths make pilgrimages to see this spectacular edifice for themselves.[3]

The Great Forge is depicted close to its World of Warcraft incarnation.