Guide Mudmug to Swirling Pools within the Gilded Fan, and help him collect 30 pawfuls of Gladewater.

If you become separated from Mudmug, you can find him next to the giant banana in the Gilded Fan.

Look at it, <name>: the Gilded Fan. I heared lots of good things about the water they got here. Lots of bad things, too.

No sayin' what kind of water Chen's gonna be needin', so what say we make him a little sampler platter?

Come on, let's get movin'. We'll go scoop up some water together.

That Stormstout feller says he's the best brewer that ever was. Might be true, couldn't tell ya one way or the 'nother as of yet.

Lookee that, neighbor! That is quite the collection of water we got here. With magical water like this, I'm sure that Chen'll make a brew that really shines.

Or possibly a brew that lands someone in the outhouse for a month. I guess we'll just have to wait and see. 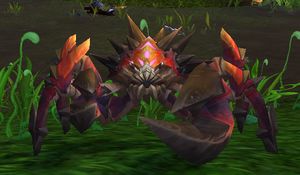 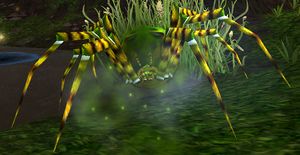 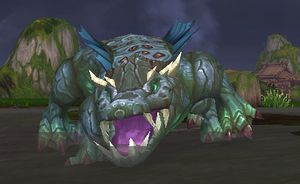 Speak to him again:

You ready to go water-huntin?

I'm ready to go, Mudmug.
Mudmug says: Let's head out into that glade. Look for dark, swirling pools of water... that'll be the good stuff.

At the first pool:

At the second pool:

Mudmug says: Looks like he's got a little bit o' that water stuck in his gills. I'll just scoop some of this up...

At the third pool:

At the fourth pool:

Mudmug says: I'll just scrape some of this water from his little spider mouth-parts. A little bit o' poison never hurt no one, right?

At the fifth pool:

At the sixth pool:

Mudmug says: Now this is what I'm talkin' about! Ain't no spiders or crabs in this water.
Mudmug yells: Crap!
Mudmug says: Dang ol' croc nearly took off my head!

Mudmug says: Holey smokes, this fella swallowed a lot of water. I oughta pick some up. I bet that Chen never made no croc-belly-water beer.

At the last pool:

Feel free to turn in to him immediately upon completion.

If adventurers haven't found Manglemaw yet, up in the northwest corner is a named crocolisk, Manglemaw. Kill it to spawn his mother, Manglemaw's Mother. She drops an