The Halls of Origination 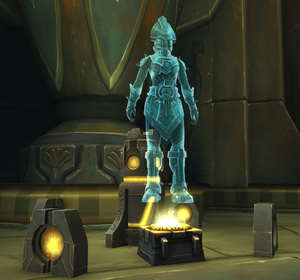 A projection of MOTHER in the Halls of Origination. 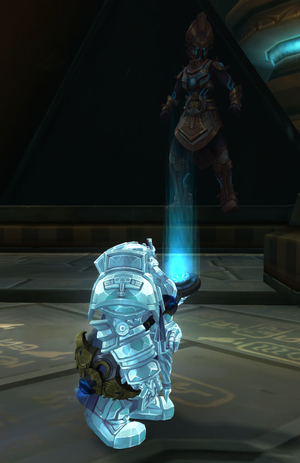 MOTHER is always just a call away.

Defeat the Amathet forces and reactivate the forge in the Halls of Origination.

It looks like the Halls of Origination have been claimed by a group o' tol'vir calling themselves the Amathet. I don't know much about them other that they're new in town and not the friendliest of types.

We'll need tae get in there and re-activate the forge, or else Azeroth will be done for!

Azeroth's gonna be done for if we dun get this thing back online!

We've got the forge back, but not before N'Zoth was able tae cripple her systems.

I'm afraid our work is far from done.

Enter the Halls of Origination through its dungeon portal to begin the scenario.

Reach the inner chambers of the Halls of Origination.

Magni Bronzebeard says: It's been ages since I've held a hammer in me hands. Feels good tae be back in the action.

As you approach the Maker's Overlook, an Amathet Sun Priest and two Amathet Zealots run down the stairs.

Amathet Sun Priest yells: Intruders! You dare defile this place with the curse of flesh?

Amathet Sun Priest says: The unworthy... will be... purged...

Once all three are slain:

Magni Bronzebeard says: Looks like we'll have tae fight our way through. Let's get movin'!

Several Amathet Guardians, Zealots, and Sun Priests occupy the path forward and must be dealt with or sneaked past. In the room before the Chamber of Prophecy, a pair of Amathet Zealots can be seen hounding some Enslaved Tol'vir, attempting to bring down a door to a sealed off section of the complex. The tol'vir can be freed by killing their subduers, and they'll thank you before running off toward the beginning of the instance.

Enslaved Tol'vir says: Thank you, friend. Ramkahen will know of your deeds.

Reach the Chamber of Prophecy to complete this stage. 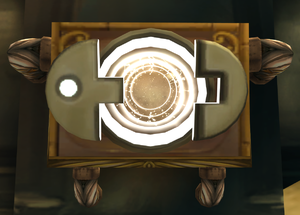 Disable the defensive systems in the Chamber of Prophecy.

Watcher Statues adorn the walls of the chamber, ready to fire solar beams at anyone who steps onto the bridge. You'll need to head down the stairs and deactivate them. There are two consoles to the left and two to the right.

Reach the lift in the Maker's Rise.

As you start to cross the bridge, an Amathet Guardian enters the room, backed by two allies (Amathet Artificers, Amathet Zealots, or one of each).

Amathet Guardian yells: The forge is ours, trespassers!

Proceed through the hall toward the Maker's Rise. There, an Amathet Artificer and an Amathet Zealot can be seen standing on the lift with Watcher Aum-ka.

Amathet Artificer says: The watcher is not yet complete. I need more time!
Amathet Zealot says: Our enemies are already upon us! Activate it!

Watcher Aum-ka stands up, and the Artificer and Zealot flee to the Vault of Lights.

Defeat Watcher Aum-Ka and activate the lift in the Maker's Rise.

After you enter the lift room, all four of the room's doors begin to close.

Once the construct has been dealt with:

Magni heads over to the Lift Controls.

Magni Bronzebeard says: What the... the power's been shut off! Hang on, I'll get us access tae the conduits.

Magni manages to open the room's western gate, as well as the southern gate which leads back the way you came.

Locate the power terminal for the Maker's Rise in the Vault of Lights.

The path leading to the Vault of Lights is full of neutral Tomb Scarabs. The vault itself is filled with Amathet troops, who appear to be tinkering with the power terminals and consoles.

On approaching each terminal, Magni will say something about it. The Maker's Rise terminal is highlighted on the map.

Magni Bronzebeard says: "Norgannon Data Archive?" Must be where all o' the Forge's diagnostics are stored...

Magni Bronzebeard says: Reorigination? Back away slowly, now. Best not tae be messin' with that...

Magni Bronzebeard says: This must be where they're powerin' the defenses we encountered earlier. We can shut this one off.

Magni Bronzebeard says: Ah, this is the lift's console! If we reroute the power here, we can get her runnin'! 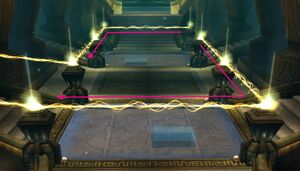 Re-route the power circuits in the Vault of Lights to the Maker's Rise terminal.

Use the Power Consoles to direct the beams of light to the correct terminal.

Magni Bronzebeard says: That should do it!

If you don't finish within 10 minutes, Magni will ask MOTHER to bypass the puzzle for you:

Magni Bronzebeard says: Ach, why did they have tae make this contraption so convoluted?

Magni pulls out a device, displaying a hologram of MOTHER.

Sun Prophet Tenhamen enters the vault from the northern door.

At 50% health, Tenhamen will cast off his disguise, revealing his true form:

N'Zoth appears in the adventurer's mind.

N'Zoth says: Such misplaced zeal. Their eyes remain closed to the true path.
N'Zoth says: Not like you. My devoted chosen. 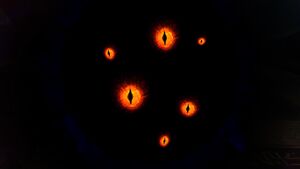 N'Zoth's eyes as seen by the adventurer.

Take the lift to the upper chamber of the Maker's Rise and reactivate the Forge of Origination.

Returning to the Maker's Rise:

Magni Bronzebeard says: Looks like the lift is workin'! The control chamber should be on the third floor.

Interact with the Lift Controls.

<The lift controls are operational.>

<Take the lift to the first floor>

<Take the lift to the third floor>

As you arrive on the third floor, Magni runs over to a nearby Titan Projector.

Magni Bronzebeard says: Here we are! I'll contact the Chamber of Heart.

Magni activates the projector and an image of MOTHER appears.

Once the two Power Terminals are activated:

Activating the Main Console will cause a cutscene to play.

[Heart of Azeroth]. The device on the console opens up, glowing with energy.

The adventurer walks over and stands next to Magni at the projector.

The image of MOTHER vanishes.

Then he'll teleport away, only to reappear in the same place.