The Hammer in the Deep

Use Therazane's Portal to travel to the Crumbling Depths. Accompany Stormcaller Mylra and Thrall to recover the Doomhammer.

You found it! The Doomhammer fell to the Crumbling Depths... But the Legion remains a step ahead of us. If we hurry, we can follow the demon Geth'xun and retrieve the hammer before any more of this realm is corrupted.

Therazane will open a portal directly there. Let's go!

The orcs had a prophecy about the Doomhammer. It was said that a stranger will raise the hammer high, and with it, justice shall reign. Maybe... maybe YOU were meant to be that stranger all along.

Come, <name>. The Earthen Ring needs you. And Azeroth needs us. 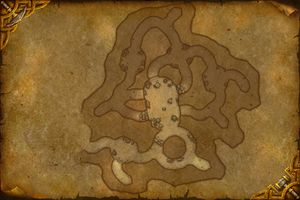 Upon accept
Therazane says: Go now, retrieve your weapon and slay the demon filth that seek it.
Therazane says: Clean up your mess, flesh-children, and stop throwing your garbage down into my realm!

Thrall says: The Doomhammer is somewhere in these chambers. I can feel it.
Stormcaller Mylra says: Here! That demon must've crawled this way. There's fel blood scattered on the stones.
Thrall says: Scout the chambers ahead... I will stay nearby...

Stage 2: Corruption in the Deep

Stage 3: Hot on the Trail

Stormcaller Mylra says: Watch it! That thing's corrupted by the fel. Kill it!
Thrall says: I remember the night Orgrim fell, run through by a knight's lance during the liberation of the last orc internment camp. As he bled out onto the fields of Arathi, he bestowed the Doomhammer to me.
Thrall says: The Doomhammer is not merely a weapon. It is a symbol. A symbol of hope, of power... Proof that an individual can change the world.

Stage 5: The Demon Below

Thrall says: We've got to keep moving. Geth'xun is close...
Stormcaller Mylra says: Look! There he is!
Geth'xun says: Bah! What is this sorcery?
Geth'xun says: This hammer... I must claim it for my masters...
Stormcaller Mylra says: Shaman, we can't let that weapon fall to the wrong hands. I'll distract him. You grab the Doomhammer. No time to argue - go!

Use the Doomhammer to destroy Geth'xun.