From Wowpedia
(Redirected from The Harborage)
Jump to: navigation, search 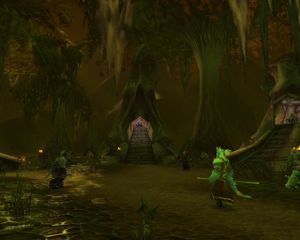 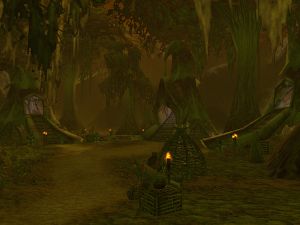 When populated by Lost Ones.

The Harborage is a base of Broken who managed to stay sane after crossing over to the world of Azeroth from Draenor. It is located in the northern part of the Swamp of Sorrows. The Broken here were until recently led by Magtoor.

The Broken of the Harborage were harassed by the Lost Ones of the Fallow Sanctuary despite being their former brethren. The mutated draenei stole draenethyst shards from the people of the Harborage, who consider them sacred and important for their sanity.

Until then the Harborage was a neutral village. Anchorite Avuun came to reside there, researching on the Broken and trying to find a cure for their state, while trying to convince the people of the village to stop their dealings with the Horde.

After the Cataclysm and the construction of Marshtide Watch nearby, the Broken of the Harborage finally joined the Alliance. The settlement was refurbished with draenei architecture and now serves as an Alliance-only town with a flight path.

In the passing years Magtoor has grown old, and Anchorite Avuun and the Harborage are readying for him to pass away.