From Wowpedia
(Redirected from The Heartland)
Jump to: navigation, search 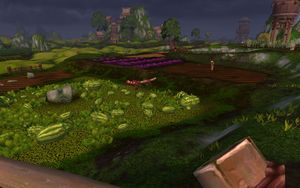 The Heartland is the largest farming land in all of Pandaria found in west-central Valley of the Four Winds. The land is able to produce large crops due to the magic properties of the nearby water source, which comes from the Vale of Eternal Blossoms. Haohan Mudclaw owns much of the land, but not all of it, the rest is claimed by other pandaren some of which are high ranking members of the Tillers.

The land is not just used for crops, but also used to raise animals such as sheep, chickens, goats, yaks, and even mushan. Recently though the Springtail virmen has dug a burrow beneath the Mudclaw's farms where they raid the land stealing carrots and destroying the turnip fields. The Kunzen hozen, from the Skyrange to the west, have also been raiding the fields destroying tools and stealing crops.

This field is the setting for Cooking Impossible PvP Brawl.