From Wowpedia
(Redirected from The Howling Oak)
Jump to: navigation, search 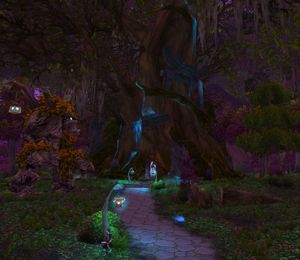 The Howling Oak was an area in the north of the night elven capital city of Darnassus, centered around large Gilnean oak tree. It was the new home of the refugees who fled Gilneas with the aid of the night elves following the Forsaken invasion. The tree itself is a "worgen tree", very similar to Tal'doren in the Blackwald. The area is accessible from the Craftsmen's Terrace and Cenarion Enclave from the southeast and southwest respectively.

The Howling Oak was originally grown through the aid of the night elven druids from a seed taken from Gilneas. It now stands for all the Gilneans have endured since the ruin of their kingdom, and all that their people have since accomplished.[1] King Genn Greymane would make an appearance here shortly after the Gilneans' arrival in Darnassus, where he and his people would be greeted personally by High Priestess Tyrande Whisperwind.

It's a place where both worgen and night elf druids train.[2]