The Hunter and the Prince

The Hunter and the Prince
Level: 80

[Leggings of the Turning Point]

Matthias Lehner in the Court of Bones wants you to look for a Bloodstained Stone and complete the Prince's Destiny.

Before the prince became a king, he fought many battles... but only one where he came close to dying.

It was fought right here. After you let me show you what happened, you'll understand everything.

Find a bloodstained stone and pick it up from the floor. You'll see what happened.

The first thing he did when he became king was to rid himself of it. He threw it down the pit where we first met. And you, <name>, were the first person to touch it since. 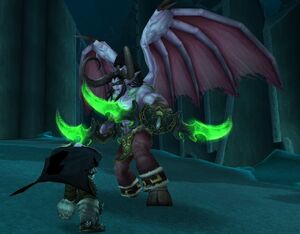 There are several stones scattered about the courtyard, just west of the quest giver.

Touching one the stones once again transforms the player into Arthas, with a different set of abilities. This time, it's a one on one with Illidan Stormrage: the same duel seen after the Warcraft III mission A Symphony of Frost and Flame. Arthas will start with 188,000 HP and an empty mana bar worth 25,014 MP. Illidan starts with 903,000 HP and Boss status.

Parry until Arthas has enough mana to Stomp and immediately follow up with Annihilate. Do that about 4 or 5 times to defeat Illidan and complete the quest.

During the fight you will get a debuff called Pierced Heart. Its text is: "Your heart has been grazed by Illidan's glaives. If only you could rid yourself of this useless thing..."