The Hunter of Shadows (WC3 Orc)

The next morning, in the shadowed woods of Ashenvale... 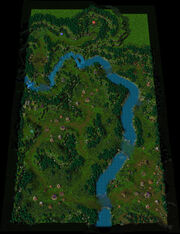 The Troll Witch Doctors have felt the presence of a mysterious power emanating from the nearby forest. If this volatile energy can be harnessed, it may provide a way to destroy Cenarius and his band of warrior women.

The so-called demigod, Cenarius, has destroyed most of the lumber stores that you had so painstakingly accumulated. You must find a way to slay the demigod in order to continue the operation and construct Thrall's new settlement.

Warsong forces continue cutting down the forests of Ashenvale. Cenarius looks out over the land from atop a hill.

Cenarius: Who dares defile this ancient land? Who dares the wrath of Cenarius and the night elves?
Cenarius casts a spell, transforming many of the trees into treants that attack the orcs.

Warsong Orc: The forest is coming alive! We're under attack!

Warsong Orc: Their numbers are too great! We must fall back to the other side of the river!

Cenarius casts a spell, immediately regrowing the dozens of trees felled by the Warsong.

Cenarius: Now, my warriors, cleanse these brutes from the wilds! I will watch over you from the forest.

Witch Doctor: Hellscream, I sense a dark power emanating from the wilderness! It might be the key to destroying Cenarius!

Witch Doctor: That be it, mon! The dark energies that I sense come from the pool!

Satyr: Foul orcs! The burning masters charged us with protecting this well. You are unworthy of drinking from these dark waters!

Grom Hellscream: I don't know what you are or who you serve, but no one bars my way!

Witch Doctor: The pool emanates great power, but I smell the stench of a demon curse about it!

Grom Hellscream: I am cursed already! If I must drink from these waters to defeat Cenarius, then I will.
Grom steps up to the edge of the tainted pool. A Grunt runs up to him.

Warsong Orc: No! That goes against everything the warchief teaches us! We can't let rage overcome us again!

Grom Hellscream: No, warrior. We must embrace it as never before! We must become the vessels of destruction that we were meant to be!
Grom drinks from the pool, causing him to grow in size and turn red...

Grom Hellscream: Yes! I feel the power once again! Come, my warriors! Drink from the dark waters and you will be reborn!

Warsong Orc: Chieftain, these creatures press us hard! And their demigod still lurks in the forest! How can we possibly defeat him?

Grom Hellscream: Weak-minded coward! Nothing is invincible! If we are to live, then this Cenarius must die!

Cenarius: The demons did their job well. You creatures are as reckless and bloodthirsty as they ever were!

Cenarius: Is that what you tell yourself? Despite what you may believe, you are no better than the malignant bile that flows through your veins.

Grom Hellscream: The Demigod has fallen, the Warsong is supreme!

While Grom and his warriors run through the forest, they are suddenly met by Mannoroth.

Grom Hellscream: Mannoroth! It... can't be.

Mannoroth: I've come to bring you and your brethren back into the fold. Though you orcs failed the Burning Legion before, you will now serve us once again!

Mannoroth: Stupid, pitiful creature. I am the rage in your heart. I am the fury of your thoughts. I alone empowered you to bring chaos to this world, and by the endless void, you shall!

Following the Warsong clan's initiation of their logging operations in southern Ashenvale, the Night Elf Sentinels launched a massive counterattack to drive the Orcs out. The Warsong clan had even attracted the attention of the ancient, reclusive demigod, Cenarius, who personally took command of the Night Elf forces moving against them. Cenarius wiped out all of the Orcs' outposts before sending his forces against Hellscream's main base. After barely managing to repel several savage attacks by the Sentinels, defeat for the Orcs seemed imminent. The Shamans and Witch Doctors under Hellscream's command then sensed a powerful energy emanating from the woods, which turned out to be a well fouled with the Blood of Mannoroth. After defeating the satyrs guarding the befouled well, Hellscream, despite everything Thrall had taught him, gave himself over to the demonic corruption. The Warsong Clan drank the blood and became Chaos orcs imbued with a bloodlust and demonic powers. With these new powers, the Orcs easily overcame the Sentinels and slew Cenarius, forcing the Night Elves to retreat back into the depths of the forests.

Hellscream's sense of victory was short-lived, however. Mannoroth appeared before him and declared that the Orcs would serve the Burning Legion once again, despite Hellscream's feeble protests that they were "free".