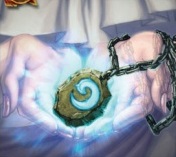 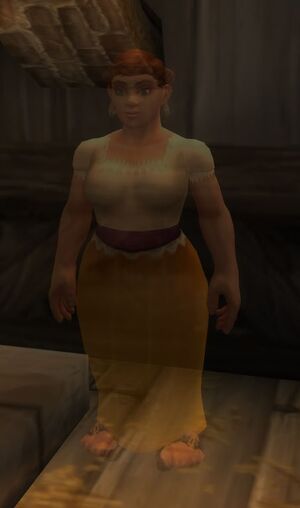 You sometimes can see The Innkeeper's Daughter after using the stone to hearth.

The Innkeeper's Daughter is a rare archaeology artifact that requires 150 skill to find and 150 Dwarf Archaeology Fragments to solve. Up to three

[Dwarf Rune Stone] keystones may be used to complete it.

This item functions as a

[Hearthstone], and shares its cooldown.

[The Last Relic of Argus] does not share this cooldown, nor does a

After being used, players will occasionally be followed for a short time by the spirit of the Innkeeper's Daughter. This occurs for both Alliance and Horde. 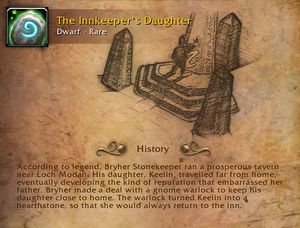 This small stone resembles a Hearthstone. It is warm to the touch and makes very faint giggling noises at inopportune moments.

According to legend, Bryher Stonekeeper ran a prosperous tavern near Loch Modan. His daughter, Keelin, traveled far from home, eventually developing the kind of reputation that embarrassed her father. Bryher made a deal with a gnome warlock to keep his daughter close to home. The warlock turned Keelin into a hearthstone, so that she would always return to the inn.

Apart from the spirit that sometimes follows you, this item functions like a

[Hearthstone] in almost every way: