From Wowpedia
(Redirected from The Iron Wolf)
Jump to: navigation, search

For the character from the main universe, see Fenris Wolfbrother.

Fenris Wolfbrother, also known as The Iron Wolf, is the warlord of the Thunderlord clan and one of the warlords of the Iron Horde.

Born a Frostwolf, Fenris was the oldest son of Geyah and Garad, chieftain of the Frostwolf clan and was supposed to inherit the title of chieftain from his father.[3]

Though his father pressed ideals of family and tradition on him, Fenris believed that his destiny was greater. When their home came under threat from the gronn, giant beasts that could be brought down only through a coordinated effort, Fenris defied his father's wishes and hunted with the neighboring Thunderlord clan. Fenris was victorious and continued to hunt with the Thunderlords as well as with the Frostwolves. He joined the group of Ger'hel, his future mate. During a Kosh'harg festival, Garad declared in front of everyone that his son's pursuit of fame was hollow and without honor. Fenris then challenged Garad to a mak'gora and was defeated but not killed. Humiliated, Fenris left his native Frostwolf clan and joined the Thunderlords. There, his skill and intensity gained him notoriety, regardless of blood ties.[4] He discarded the name Fenris Wolfbrother and embraced the nickname he earned from his daring exploits: the Iron Wolf.

For years, Fenris ascended through the ranks of the Thunderlord clan, eventually becoming its chieftain. Then the legendary chieftain Grommash Hellscream formed the Iron Horde, an army of orcs forged for one purpose: to conquer all of Draenor. The multitude represented the strength of diversity that Fenris admired and yearned for. Though composed of different clans, the Iron Horde worked for the glory of all. With the soul of the orc race at stake, Fenris looks to coerce the stubborn Frostwolf holdouts to join the Iron Horde... even if it means destroying everything his father taught him to cherish.[2]

Like the other orc clans, the Thunderlords were invited by Grommash Hellscream to join the Iron Horde, an offer Fenris accepted. His father Garad and the Frostwolf clan however refused to join the Iron Horde, and Fenris was ordered to kill him. He led a small group of the Thunderlords and ambushed Garad and Ga'nar. After he killed his father, Ga'nar was left for dead and later captured.[5] Fenris's youngest brother, Durotan, became the new chieftain of the Frostwolf clan.

Under his leadership, the Thunderlord clan leads attacks on the Frostwolf orcs, most notably at Wor'gol and Stonefang Outpost, where the Thunderlords make use of cannons supplied by the Iron Horde to devastating effect. Ga'nar leads a raid on the Thunderlords, killing his sons Hatock, Grotan and Skal in the process. After being pursued by Lokra and Asha, the latter of which he mortally wounds with a spear, he is later confronted by Durotan and Ga'nar in the Hunter's Hall. Here, he reveals himself, as the two of them had been unaware that the Iron Wolf was their brother. Claiming that he always knew they would reunite one day, he enters the fray along with his rylak, Chilltongue, and is summarily killed.

15 Thunderlords slain
Call in all reinforcements. I want the She-Wolf taken alive.

Gargrak slain
RETREAT! WE WILL COME BACK, FROSTWOLVES!

You are fierce, pup, but your attachments make you weak!
Free yourself of weakness, or be swept away by the Iron Tide! 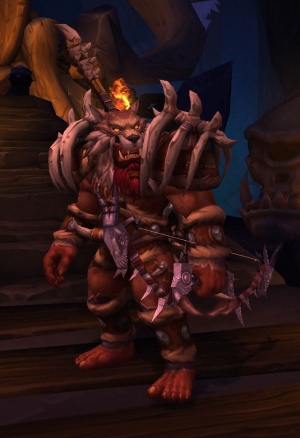 Intro
Ahh, the brothers Frostwolf. I knew we would reunite on the battlefield someday.
Or don't you recognize your eldest brother?

Chilltongue slain
Stinking animals, all of you! Sleeping with your dogs.