King Rastakhan is dead, the Zandalari fleet has been decimated, and we have lost valuable soldiers.

The Dark Lady is on her way from Orgrimmar to assess the situation. We must figure out our next move before the Alliance strike again.

I believe protocol now would be to pay respects to the fallen king. We will determine our next move afterwards.

Good, you're all here. Let's begin our discussions. 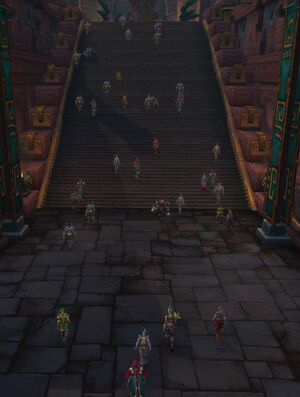 The city is filled with mourners:

After paying respects
Princess Talanji says: Thank you for coming, <name>. Zuldazar is still reeling from de Alliance attack. My people's faith has been shaken... and so has my own.
Baine Bloodhoof says: I too know the pain of losing a father. If there is anything I can do, please do not hesitate to ask.
Nathanos Blightcaller says: You have seen firsthand the treachery of the Alliance. Let your grief be sated by vengeance against them.
Baine Bloodhoof says: This is not the time to speak of revenge, Blightcaller!
Nathanos Blightcaller says: Enough! The warchief has arrived.
Sylvanas appears, walks towards the altar, and stops in front of it.