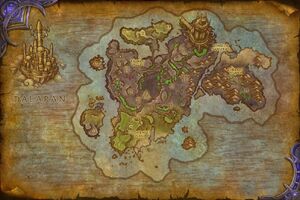 Accompany King Anduin to the Tomb of Sargeras.

Now that I have seen the Broken Shore and the terror of the Burning Legion first hand, my eyes have been opened to the truth.

I speak not of the unfathomable evil of the enemy, but of the bravery and sacrifice that such evil brings about in the hearts of our people.

My father once told me that every king must carry the weight of his own crown. Mine has never felt heavier than it does at this very moment...

Please take me to the place where my father died, so that I may honor his sacrifice.

You have helped me more than I can say, <name>. For that, you will always have my thanks.

Cinematic
Genn and Velen approaches Wrynnfall.
Genn Greymane: Here.
Genn Greymane: This is where his father fell.
Camera shows the battlefield.
Prophet Velen: The boy has never known the horrors of the Legion as we have.
Anduin Wrynn: No...
Genn and Velen turn around. Anduin lowers his hood.
Anduin Wrynn: ...I haven't.
Prophet Velen: Anduin...
Genn is upset.
Genn Greymane: How could just leave? (Audio says, "How could you just leave?")
Anduin Wrynn: I had to come here.
At Anduin's plainly spoken fact as he walks past the two men, Genn's expression immediately softens.
Genn Greymane: My boy, you don't need to see this.
Anduin glances up at the Screaming Cliffs; images of the Horde's archers appear as smoke and quickly vanishes in the wind. He walks forward toward the remains of his father, glancing at the remains of the Fel Reaver Varian destroyed as he passes. He walks up to the cracked depression and stares down at his father's remains.
Anduin Wrynn: Father...
Image flashes of Varian getting stabbed by the felguard. Anduin collapses to his knees. He then clears the blackened sand and dust aside with his hand and uncovers the right half of his father's sword.
Anduin Wrynn: You never surrendered.
Anduin stares up at the Tomb of Sargeras.
Anduin Wrynn: Even here, at the very end.
Looks back down at Shalamayne.
Anduin Wrynn: I cannot do this, father. I can't be the hero you were. I can't be the king you were.
As he speaks, the reflection in the blade is of Varian's eyes, as if it were he in Anduin's predicament.
Genn approaches Anduin from his right side.
Genn Greymane: Anduin...
The older king kneels in front of him.
Genn Greymane: Your father's actions were indeed heroic. They were his challenge to us, his people to never let fear prevail...
Genn picks up the sword half in his hands and places it in Anduin's hands.
Genn Greymane: Even at the very gates of hell.
Anduin looks back up at Genn, but his mind takes him to Stormwind where he is surprised to see his father in the middle of the Valley of Heroes. They are standing, facing each other, Anduin with his back to the inner gates as the future of the kingdom, and Varian's to the outer gate, as if about to leave for the past. Varian looks upon his son with a proud and gentle smile. Anduin looks down at the blade then questions his father, looking up searchingly at him.
Anduin Wrynn: What am I supposed to do now?
Varian puts his hand on his shoulder, echoing his words to him back at The Inner Sanctum in the aftermath of the Siege of Orgrimmar. His face is an expression of firm commitment.
Varian Wrynn: What a King must do.
Anduin closes his eyes and gathers his thoughts to reconvene into the present. Genn's eyebrows raise in surprise and looks upon the young king as Anduin's renewed purpose and resolve reignite the blade's hollow, this time with a Light-like golden glow. The king of Stormwind looks up and opens his eyes, his expression as if a refection of Varian.

The Broken Shore is a shattered, desolate land. I now realize how necessary it was for me to see this for myself.