For the achievement, see The Kingslayer.

[Sorrow], are the artifacts used by assassination rogues in World of Warcraft: Legion.

The Kingslayers are obtained from

The orc warlock Gul'dan had these daggers made for his personal assassin, Garona. The blades are said to drink blood and inflict traceless poison, leaving little sign of their grim work: the perfect tools for an assassin. She used them to carry out countless atrocities while under Gul'dan's control, including the murder of Stormwind's King Llane, whom she had befriended. Afterwards, in anguish, she asked a trusted ally, Meryl Winterstorm, to help her hide the blades away in the hope that they'd never have to be used again.[1] 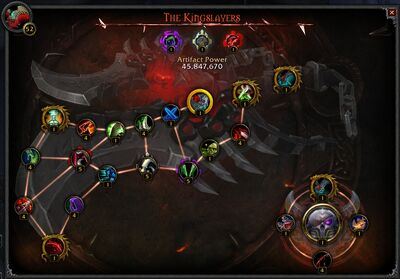 Hidden trait: Sometimes triggers a dialogue with repair vendor in Valdisdall in Stormheim that gives you 50 Artifact Power.

Garona stabbing Llane with the Kingslayers, as seen during the Yogg-Saron encounter in Ulduar.