The Lady's Necklace is a quest starting item that drops from Fallen Rangers and Deatholme Acolytes in Windrunner Spire in the Ghostlands. The quest it starts tasks heroes to return it to its owner, Sylvanas Windrunner. 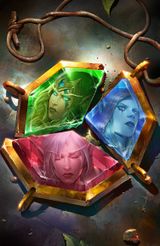 The three necklaces on the cover to the comic Windrunner: Three Sisters

The necklace was intended to be given by Alleria Windrunner to her sister, Sylvanas, before Alleria left through the Dark Portal for the Alliance Expedition assault on Draenor. Vereesa Windrunner was given an identical necklace. The three necklaces were once part of a larger one given to Alleria by their parents, which she had melted down and crafted into three lockets in Stormwind. The emerald she kept for herself, and she gave the ruby and the sapphire to her second, Verana, to deliver to her sisters.[1] 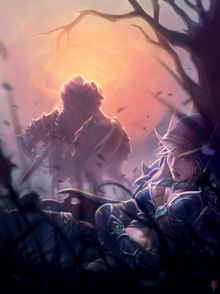 Sylvanas killed while wearing the necklace.

During the brutal Scourge invasion of Quel'Thalas, Sylvanas gazed upon her necklace, lost in thought. Knowing that she would likely not survive the colossal battle, she mused that she would be reunited with Alleria soon. However, following her death and resurrection as a banshee, the necklace had disappeared. Sylvanas' body was hurled onto a meatwagon, and the necklace was no-where to be found.[2]

Later, Sylvanas would break free of the Lich King's dominion, regain her body, and go on to found her own empire of undeath, comprised mainly of many other murdered humans and elves killed at the hands of the Scourge - the Forsaken. 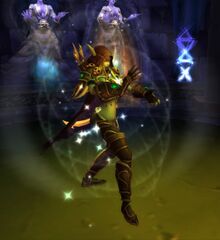 Sylvanas performs the Lament of the Highborne.

Still, there was no trace of her necklace, which was left behind in Quel'Thalas.

Lady Sylvanas' necklace would ultimately be found by blood elven adventurers several years later, at Sylvanas' own former place of residence, Windrunner Spire. The blood elves, who had found a strange kinship in their former Ranger General's people, returned it to her. Lady Sylvanas was shocked to lay eyes upon it again, though quickly composed herself and stated that it, like Alleria, was a long dead memory; dropping the necklace and dismissing her visitor.

However, in a rare moment of emotion, Sylvanas summoned a choir of banshees and began to sing a melancholic tune for her homeland. At its climax, she knelt down and picked up her necklace once more.

The Lady's Necklace drops from any of the Fallen Rangers and Deatholme Acolytes residing in Windrunner Spire.

During the Sunwell trilogy, Lady Sylvanas traveled to Quel'Thalas for reasons unknown. This was never particularly elaborated upon, though it is possible that Sylvanas intended to recover her beloved necklace.