From Wowpedia
(Redirected from The Last Guardian (interlude))
Jump to: navigation, search 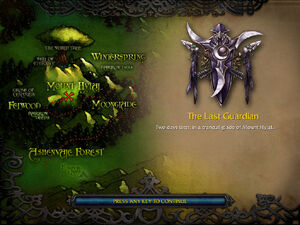 The Last Guardian is an interlude in the night elf campaign Eternity's End. It represents the first time several major events are depicted in-engine.

Two days later, in a tranquil glade of Mount Hyjal...

Tyrande and Furion wait in a glade while a raven flies overhead.

Tyrande Whisperwind: We have no time for this, Furion! What are we doing out here?

Furion Stormrage: Last night in a dream, a great raven spoke to me and summoned me to this place.
Thrall and Jaina arrive in the glade.

Thrall: We were summoned here as well.

Furion Stormrage: Who are you, outlanders?

Thrall: I am Thrall, son of Durotan, Warchief of the Horde.

Tyrande Whisperwind: You are not welcome here!
The raven lands and transforms into the Prophet.

The Prophet: Peace, Priestess. They've come to aid you against the Legion.

Furion Stormrage: It was you in my dream! But who are you to make such an offer to us?

The Prophet: I... am the reason for the Legion's return.

The Prophet: Years ago, I brought the orcs into this world, and by doing so, I opened a path for the demons as well.

The Prophet: For my sins, I was murdered by those who I cared for most.

The Prophet: Despite my death, war raged across the lands of the east for many long years, leaving entire kingdoms devastated in its wake.

The Prophet: Now, at long last, I have returned to set things right. I... am Medivh, the Last Guardian. I tell you now, the only chance for this world is for you to unite in arms against the enemies of all who live!