The Last Relic of Argus 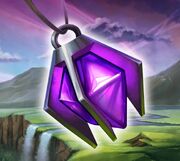 The Last Relic of Argus.

The Last Relic of Argus is a rare archaeology artifact that requires 300 skill to find and 130 Draenei Archaeology Fragments to solve. Up to three

[Draenei Tome] keystones may be used to complete it.

Teleports the player to an often bizarre and out of the way location, usually in Kalimdor or the Eastern Kingdoms (though there is one Outland location known). The Relic has a 5-second cast time (affected by haste), a 12-hour cooldown, and is usable in combat.

Argus became reachable in Legion, but even when using the relic on the planet's surface it will take you to one of the original locations instead.

The currently known locations the Relic can choose are:

This is a simple draenei crystal that appears to be thousands of years old. You are fairly certain that it is not of this world.

Before they lived on Azeroth or Draenor, the draenei, who still called themselves the eredar at the time, lived on Argus. When Sargeras took notice of Argus, Prophet Velen fled with some of his people, who became the draenei. The remaining eredar were absorbed into the Burning Legion. This simple crystal was taken from Argus when Velen fled. The inscription on the bottom reads, 'I long for Mac'Aree.'

[Hearthstone], but set to Mac'Aree. The fact that it teleports randomly may be simply due to the fact that the user is not on Argus.