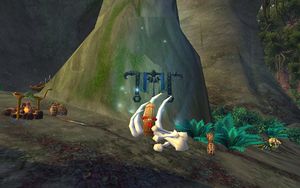 Defiant to the last, the saurok stood their ground against the mogu in the swamps of Krasarang. It was here they had a fighting chance, drawing the imperial forces deeper in to unfamiliar territory.

The mogu death toll began to climb as the rebels poisoned water supplies and sabotaged structures.

In his fury, the Emperor Dojan continued to send troops, slaves, and weapons to Krasarang in an effort to eradicate what remained of the saurok.

They were never successful.