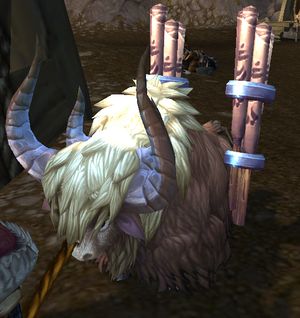 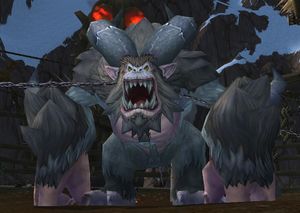 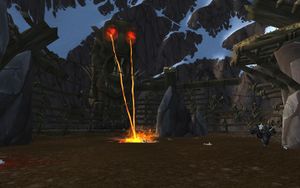 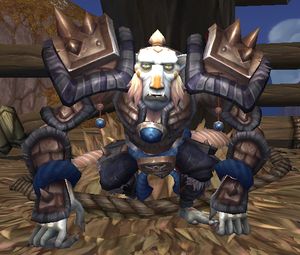 The Ook of Dook

Enrage Chomp Chomp and then defeat the Ook of Dook.

The time has come to face the Ook of Dook. We beat him, and the hozen won't have someone telling them to ravage.

Here is the plan: Yakshoe will lead Tassle in to arena and scare away Chomp Chomp.

Then, you sneak in and fight the Ook of Dook while his hozen are distracted by the yeti rampaging through their home.

We'll meet you back at Kota Basecamp with a big reward. Good fortune to you, friend of grummles.

("The Ook of Dook: Leader of the mountain tribes.")

Fortune is good, you survived.

The Ook of Dook is dead! Hurray!

Brother Rabbitsfoot says: We'll meet you at Kota Basecamp!
Brother Yakshoe says: Oh boy. Luckydo don't fail me now.
Rabbitsfoot takes off as Yakshoe leads Tassle in to the cage. He stops her not far from Chomp Chomp and lights the incense.
Tassle sniffs the air.
Realzing where she is, Tassle takes off, circling the arena once before exiting. Chomp Chomp follows her out.

Then, The Ook of Dook jumps in.

The Ook of Dook yells: No! Wikkets stole my Chomp Chomp!

The Ook of Dook is a level 88 elite hozen with 814,000 health and the following abilities:

Kite him through the eye beam - careful to not run through it yourself, and avoid the bananas he throws.

The Ook of Dook says: FEAR THE MONKEY!

Getting hit by the eye beam:

Run to Kota Basecamp to turn in.

This completes "The Burlap Trail" portion of