From Wowpedia
(Redirected from The Library)
Jump to: navigation, search

For other libraries, see Library. 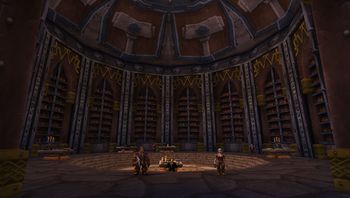 The Library of Ironforge

The Library is a large hoard of knowledge and artifacts within the dwarven capital city of Ironforge. Occupying the eastern section of the Hall of Explorers, the Library is arguably the largest singular building in the city, and is notably also home to a museum and many quest givers. The Library and its contents are administered by the Explorers' League, who are dedicated to collecting knowledge and relics from across Azeroth. Members of the League catalogue and analyze all of their findings in the library. Before coming to Pandaria, Hilda Hornswaggle spent five years here.[1]

Part of the Library is occupied by a large museum, run by Curator Thorius.

The following artifacts are on display:

Copies of the following readable tomes can be found within the library proper: