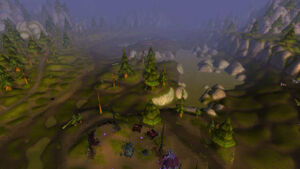 The Loch drained after the Cataclysm

The Loch is the single most prominent feature of the dwarven territory of Loch Modan. It was once the largest body of water on the continent of Khaz Modan, and third in size in the entire known world after the Lordamere and Darrowmere lakes. Fed by an underground source, the loch was originally much smaller, but more than doubled its size after the dwarves of Khaz Modan built the Stonewrought Dam at the loch's northern end.

However, Deathwing's emergence into Azeroth resulted in the destruction of the Stonewrought Dam, draining much of the lake into the Wetlands. The Twilight's Hammer has set up camp on two of the islands in the middle of the lakebed.