They have my daughter! Brojai... that Lord Reclaimer! I can see him clearly through Lyalia's eyes.

That foolish girl must have tried to take him head on.

Please, <name>! Go to the Ruins of Korja and try to free her.

I'll get Kang and try to draw out Brojai from the ruins with a distraction.

Lyalia is the only family I have left. I had to bury her mother during the war of Ahn'Qiraj.

Thank you for avenging my daughter. I am not willing to let her stay dead, however. 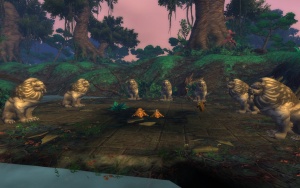 Back down to the southwest to the southern end of the Ruins of Korja. Lyalia and Kor Bloodtusk are trapped in a net. Speak with her:

The fight begins. The Sunwalker Dezco and Lorekeeper Vaeldrin will come out swinging at each other, and not the mogu, so ignore them and keep attention on Brojai. Every now and then Brojai will stop what he's doing and channel Revive Guardian on one of the statues to activate it.

The Ruined Guardian has 107,000 health, so quickly take it out then go back to Brojai. 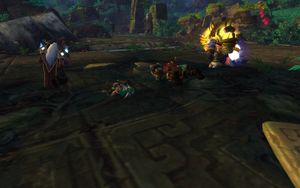 Head back to the basecamp to turn in.