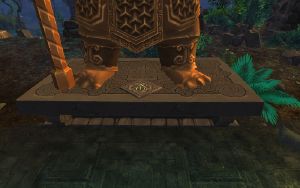 , leaning against the base of a mogu statue to the north-east behind Na Lek at the Pools of Youth in the Krasarang Wilds.

[The Dark Heart of the Mogu].

Even by mogu standards, the reign of Emperor Dojan II was short and brutish. His maniacal drive to finish his father's work and complete the great purge against the rebellious saurok legions drove him to leave his court in disarray while he set out on a doomed military campaign.

From his perch high on the cliffs overlooking the Krasarang Wilds he oversaw the slow clear-cutting of the jungle, the establishment of Dojanni Dungeons, and the gradual genocide of the saurok race.

What he didn't expect was for the remains of the saurok fifth and seventh legions to scale the enormity of the cliffs in the dead of night, ambushing his imperial pavilion from the Valley of Four Winds and forcing him over the edge. His body was never found, and the resulting disarray in the capitol left the empire in chaos for over two years while the saurok melted back into the wilds and disappeared...