From Wowpedia
(Redirected from The Maelstrom)
Jump to: navigation, search

The Maelstrom is a massive, fierce vortex of water that was created when the Well of Eternity collapsed into itself during the Great Sundering. It is located in the middle of the Great Sea which subsequently filled the void. The water churns constantly in a dizzying storm of tidal and arcane energy that seems to have no end.[1] The capital city of the Kaldorei Empire, Zin-Azshari, was dragged under[2] creating Nazjatar.

Ship and zeppelin routes go out of their way to avoid the Maelstrom, for fairly obvious reasons. 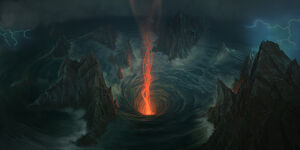 As the aftershocks from the Well's implosion rattled the bones of the world, the seas rushed in to fill the gaping wound left in the earth. Nearly eighty percent of Kalimdor's landmass had been blasted apart, leaving only a handful of separate continents surrounding the new, raging sea.

At the center of the new sea, where the Well of Eternity once stood, was a tumultuous storm of tidal fury and chaotic energies. This terrible scar, known as the Maelstrom, would never cease its furious spinning. It would remain a constant reminder of the terrible catastrophe and the utopian era that had been lost forever.[3]

During the Third War, Thrall's fleet crashed and they made an emergency landing on an island near the Maelstrom, where they found a group of jungle trolls fighting desperately against human colonists and murloc invaders.[4] The island was destroyed by Zar'jira, with Thrall and his allies barely escaping.[5] 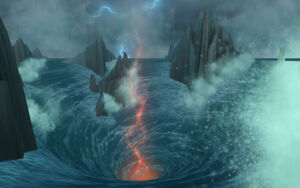 Deathwing has used the Maelstrom to re-enter Azeroth's physical plane from Deepholm, triggering the Cataclysm. Thrall is present here on behalf of the Earthen Ring, and is trying to maintain the rift with other key Earthen Ring members alongside Muln Earthfury and Farseer Nobundo[6] who made camps here. At some point, Ysera found Thrall here and sent him to a journey to aid the Dragon Aspects.[7]

In the final battle against Deathwing he attempts to flee to Deepholm and the adventurers face him before he can usher forth the final cataclysm. Even after the death of the Destroyer, the shamans of the Earthen Ring were still healing the world.[8]

With the disastrous results of the Battle for Broken Shore against the Burning Legion, the elders of the Earthen Ring called an emergency council at the Maelstrom.[9] While there, the Earthen Ring and a shaman adventurer pushed back an attack led by the fel lord Geth'xun. After the shaman adventurer reclaimed an artifact, an Order Hall was established at the Heart of Azeroth.[10]

Just northeast of the Maelstrom, a titan vault known as the Primordial Observatory can be found.

During the Fourth War, an Azerite wound erupted at the Maelstrom, which caused rampaging Azerite elementals to strike at the Earthen Ring in their attempts to claim the Azerite.[11] Soon after, Magni Bronzebeard and an adventurer arrived to secure the wound. To that end, Magni directed his ally with quelling the rampaging elements, liberating the trapped shaman and using the

[Heart of Azeroth] to seal up the wounds.[12] With the Maelstrom secured, an overjoyed Magni revealed that the damage was stopped before it could become worse. He further remarked that the Maelstrom would always be a place of great history and pain for Azeroth but that any healing done in the area made things better.[13] 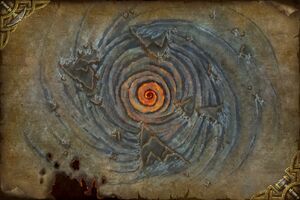 Zone map of the Maelstrom. 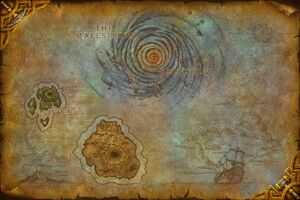 Continent map of the Maelstrom.

Regions adjacent to the Maelstrom 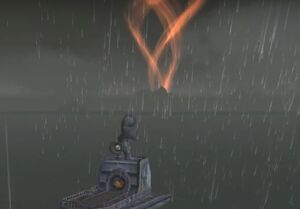 The Maelstrom from afar.

From the Warcraft III: Reign of Chaos manual:

"As the aftershocks from the Well's implosion rattled the bones of the world, the seas rushed in to fill the gaping wound left in the earth. Nearly eighty percent of Kalimdor's landmass had been blasted apart, leaving only a handful of separate continents surrounding the new, raging sea. At the center of the new sea, where the Well of Eternity once stood, was a tumultuous storm of tidal fury and chaotic energies. This terrible scar, known as the Maelstrom, would never cease its furious spinning. It would remain a constant reminder of the terrible catastrophe and the utopian era that had been lost forever..."[3]

The Maelstrom can be seen on the world map of World of Warcraft, where it sits between Kalimdor and the Eastern Kingdoms. This depiction of the Maelstrom, as well as evading ships/zeppelins, was continued in the following expansions which elaborated the map and added more travel routes.

The Burning Crusade and Wrath of the Lich King

The two first World of Warcraft expansions, The Burning Cruade and Wrath of the Lich King, included minor depictions of the Maelstrom:

In the third expansion, Cataclysm, players became able to visit the Maelstrom. As far as game mechanics are concerned, the Maelstrom is a sanctuary, where PvP combat is disabled. The zone can be reached through the quests which lead the player to Deepholm from Stormwind City and Orgrimmar. Once the player enters Deepholm, the Maelstrom cannot be revisited.

Player mobility in the Maelstrom is limited: mounting is disabled, and an invisible wall does not allow movement outside of Thrall and Aggra's piece of land. As a result, players cannot venture over via flight or swimming to visit Kezan or the Lost Isles. 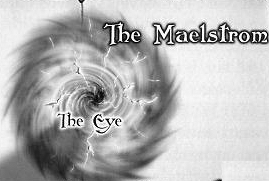 Map of the Maelstrom in Lands of Mystery.

The Maelstrom is an ancient vast storm whirl of arcane energy swirling with magical power and located in the middle of the Great Sea. It makes seagoing travel between Kalimdor and the eastern continents difﬁcult, but its magic winds hide secret mysteries. This vortex also forms the northern boundary of the South Seas, and south of it are several tropical islands.[14]

The center of the Maelstrom is called the Eye. There is not much on the surface, but beneath the waves, on the ocean's ﬂoor, there are giant sea monsters, underwater volcanoes and thermal vents, as well as the capital of both the naga and makrura civilizations, Nazjatar and Mak'aru respectively.[15] The Maelstrom creates a vortex below it, forming a massive whirlpool that leads into the depths of the Eye, creating a wall of swirling water, nearly impassable, beneath the surface. Accessing the Eye is no mean trick.[16]

10,000 years ago, when the Well of Eternity collapsed during the War of the Ancients, it created a raging magical vortex, enormous in size, that still exists today. Indeed, it shows no sign of dissipating. This vortex came to be known as the Maelstrom, and it occupies the center of the Great Sea.[14]

For as long as the eastern and western continents have existed, the Maelstrom has made sea travel between the two difﬁcult. Both the Horde and the Alliance lost numerous ships to the Drowned Reaches of the Eye during the exodus to Kalimdor. In addition, during Thrall's expedition, he was shipwrecked on one lone island somewhere in the South Seas which was probably close to the Maelstrom. It was here that he met the Darkspear trolls.[17]

The Maelstrom is just northwest of the Broken Isles and it is too close. The vortex's magical storms lash the Broken Isles, making for near constant winds and rainfall and, occasionally, something stranger. The Maelstrom's proximity makes the isles unstable. It is implied the Maelstrom is slowly eroding and damaging the artificially-raised Broken Isles, and soon the storm will prove too much and the islands will sink back into the sea.[18]