From Wowpedia
(Redirected from The Marris Stead)
Jump to: navigation, search 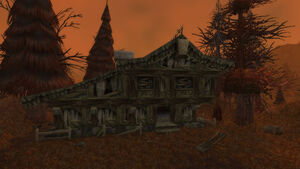 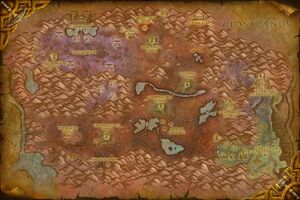 is located atop a small ridge in the southwestern area of the Eastern Plaguelands. It is found along the region's main road, not far from the border with the Western Plaguelands, and due west of the Crown Guard Tower.

Before and during the Third War

The Marris Stead was the long time homestead of Nathanos Marris and his family. His cousin Stephon lived here for a time, and Sylvanas Windrunner occasionally visited Nathanos.[1]

After the fall of Stratholme during the Third War, the Scourge swept over the once-great nation of Lordaeron, killing all in its path and raising the fallen as cadaverous undead. Despite his great skill, Nathanos Marris fell as well at his own house, murdered by the abomination Ramstein the Gorger. Nathanos rose as a mindless thrall of the Scourge, bound to the will of the Lich King.[2] 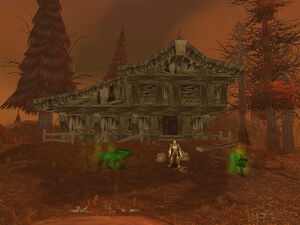 Nathanos Blightcaller and his hounds in front of the Marris Stead prior to Cataclysm.

After Sylvanas freed him and he had become a Forsaken, Nathanos, accompanied by his blighthounds, returned to his old home by order of the Banshee Queen. Here he recruited Horde soldiers to fight against the threats that infested the Plaguelands, such as the Scourge or the Scarlet Crusade.[2][3] Nathanos also collected relics from the battle of Darrowshire for unknown reasons, and kept them in his home.[4]

Nathanos' whereabouts did not go unnoticed. Mathias Shaw of the SI:7 received some disturbing reports of unusual Forsaken activity in the Eastern Plaguelands, and sent five agents to investigate. Only one of those agents returned, babbling incoherently about "Nathanos" and the word "Blightcaller." Alliance adventurers were asked to go investigate their disappearance.[5] The only thing the SI:7 had to go on was that Nathanos Marris may have been slain by this "Blightcaller," but the truth was far less pleasant. After investigating the grounds around the Marris Stead, the adventurers uncovered what was happening, realizing Nathanos was the Blightcaller himself, now a champion of the Banshee Queen.[6][7] Once it was determined that Nathanos was the Blightcaller, Bolvar Fordragon and King Varian Wrynn enlisted Alliance adventurers to gather a strike force and destroy him. Nathanos, however, managed to survive this through faking death.[8]

By the time of the Cataclysm, the Blightcaller had already been driven out of his home and had retreated to the Undercity.

The Marris Stead was empty and vacant for several years until Nathanos eventually returned following his and Sylvanas' betrayal of the Horde and the unsuccessful attempt on Bwonsamdi's life.[9]

The subject of this section was removed from World of Warcraft in patch 4.0.3 but is present in Classic.