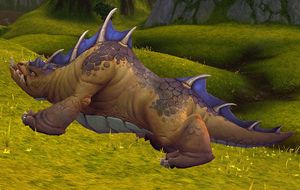 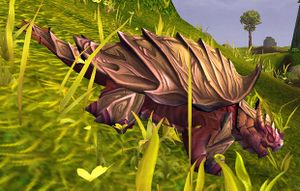 I told you earlier, my pigs are picky eaters. They need to eat meat to grow strong, but they don't like mutton, they don't like yak, and I'm not about to feed them any pig meat.

They do, however, eat meat off of the mushan beasts, and they're also quite partial to turtle. Both creatures can be found in abundance to the west.

My skills as a hunter are admittedly quite weak. Can you help out a young rancher and his pigs?

It hurts my ears to hear their hungry squeals.

Once you've been a pig rancher for a while, you can distinguish hungry squeals from regular squeals.

<Liang sorts through the meat.>

You're not just a <class>, but you're a butcher, too? You've got an eye for quality pig food, neighbor.

<Liang throws the meat into the muddy pit below.>

[87] Back to the Sty before getting started. Head down to the southwest to the combined turtle-and-mushan area and get started. Each turtle will yield 6-10 Turtle Meat Scraps, but the Mushan do not always provide meat. The pigs are also spread out in the area, but more-or-less fixed to one location. On the return to Thunderfoot Ranch, Chen and Li Li are in attendance. Li Li is still rather annoyed at Chen's pace:

Li Li says: Here we are, FINALLY setting foot in our ancestral home, for the first time in our lives, and you want to stop and rest by a PIG FARM?
Chen Stormstout says: Be patient, Li Li. If we explore Pandaria too quickly, we will quickly run out of Pandaria to explore.
Chen chuckles, but Li Li is exasperated.
Li Li says: That... barely even makes sense! You're just saying that because you're lazy and old!